Lone Rock: Base of Operations

I plan to travel a little in search of new systems and stations. At some point I want to learn about planetary scanning as well.
CMDR Chas McCarter

I’ve been exploring some more of the solar system in the Viper, scanning systems and looking for places of interest. Having made a few credits selling maps and data to Universal Cartographics, I’m now ranked as Surveyor for exploration by the Pilots Federation. I’m also the official discoverer of HIP 38129 C 2. Pretty cool right, I was paid for the privilege too! 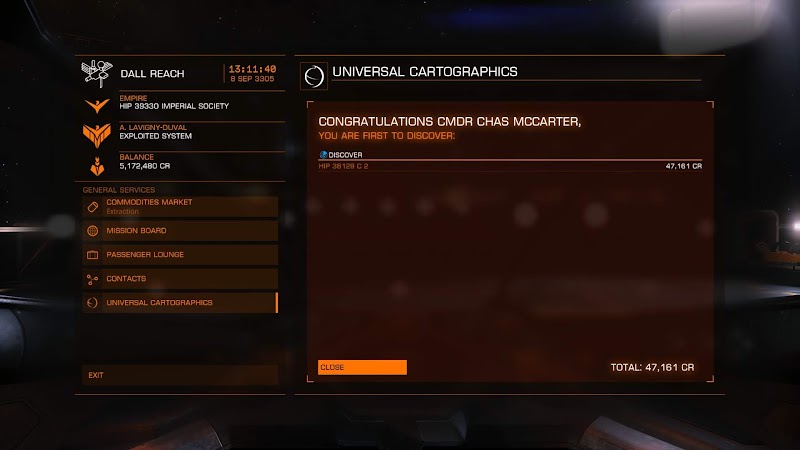 I stumbled across Lone Rock, an asteroid base in the Othime system, which I’ve been using as a base of operations. I’ve been building up my rep with the local factions and making a few credits running cargo along the way. I’ve got a friendly rep with the base now.

This is the first asteroid base I’ve come across. It’s an independent extraction/refinery outpost, current controlled by the Noblemen of Quilmes faction.

I’ve begun to scan the system to see what else the Othime system has to offer. With asteroid belts and other unexplored pockets to uncover, there’s more exploration to be had before I move on to pastures new.

Next, I plan to look at a second ship purchase to expand my repertoire as a merchant. I’ll be looking at freighters for cargo runs specifically. Since I’m running a lot of cargo, it makes sense to maximise those profits with a higher carry capacity. I may kit it out with a refinery and mining lasers, try my hand at mining too – I hear there’s a lot of credits to be made in that. With an asteroid belt close by, I’m well situated to test that out from Lone Rock.

I’ve got around 7M credits to spare. I’ll need to do some further research to see which ships are available and which provide the biggest cargo capacity in my current price range.