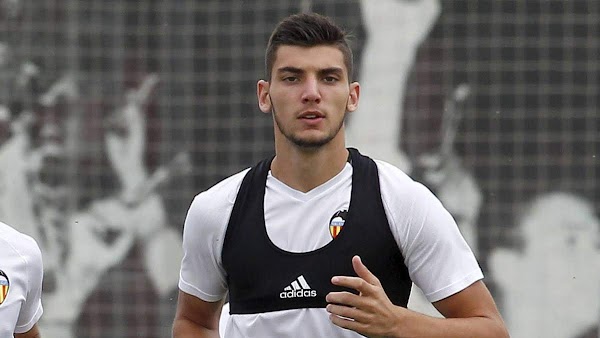 In his 4th season at the club, Rafa Mir claims Venezia’s top goalscorer award once again

An 11th place finish means that we’ve now secured a mid table place for three seasons running. We’re a firmly established outfit in Serie A. We’re still punching well above our weight in terms of performance vs revenue and net spend, but with a long term target of becoming the ‘best of the rest’, it’s time to push on and take this club to the next level.

We’ll need to step things up in the transfer market and target some high level players to do that, meaning we’ll have to up our spend on wages, which up until now has been very tightly managed (by myself rather than the board).

We don’t generate a great deal of income, so transfer budgets remain modest – we can spend, but we can’t muscle away the top players with £50M – £80M offers like teams above us can. We need to be smarter. We’re also subject to the top European clubs snooping around and unsettling our best talent, as you’ll read about further along.

Last season’s high profile signing of veteran winger, Gareth Bale, turned out to be a huge disappointment. Struggling with injuries all season, he only made half a dozen appearances before his physical attributes fell off a cliff and he retired. Fortunately, we’d only paid out a signing on fee of £650K with no transfer fee involved. Still, it was a really disappointing end to his career. 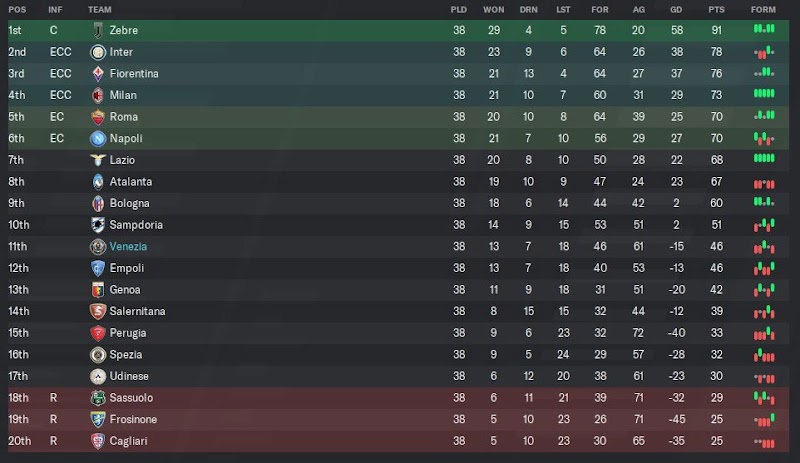 An excellent goal from Peter Lukac (Slovakian newgen) as he skins an opponent on his way to scoring a fierce effort from 18 yards out.

Scottish youngster, Kieron Bowie, gets his first international call up courtesy of David Moyes. It means he get’s a nice wage hike, but great news for us overall.

Just one more season remains before we move in to our brand new stadium! The ‘Walter Novellino Arena’ (16,727 capacity) is scheduled for completion next summer. 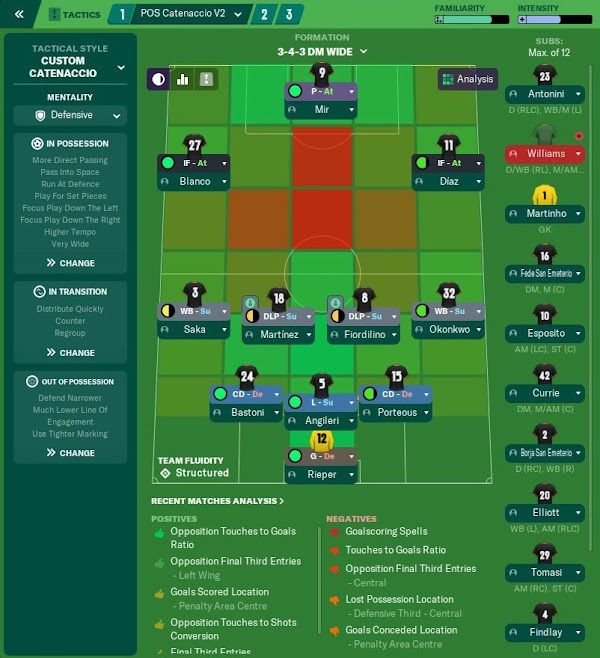 We continue with our defensive catenaccio tactic. The only real changes being a switch back to a defensive mentality (cautious for periods during last season) and the use of two deep lying playmakers to orchestrate counter attacks.

Last season saw us struggle to keep clean sheets (partly due to a goalkeeping crisis explained further along). With defensive reinforcements and a change in mentality, I’m hoping to get back to being that ‘hard to beat’ team. We’ve got electric pace from our players in the final third, soaking up pressure and releasing them is our primary weapon.

We were hit hard in January when star goalkeeper, Maarten Vandevoordt, was stolen away by Liverpool during the January transfer window, after they’d met his £25.5M buyout clause. It was a record fee for us (previously £7.5M for Kieran O’Hara, our previous number one), but we were left very short in the goalkeeping department for the remainder of the season. Up stepped Portugeese youngster, Tomás Martinho, who we’d purchased for £2M the previous summer as ‘one for the future’. He was flung in at the deep end but did fairly well to be honest. Though he only managed to keep 4 clean sheets from 21 games, he did put in a number of standout performances and the exposure to first team football did wonders for his development.

We also sold (at the end of the season) Brian Girotti to FC Köln for £15.5M + 30% of profit from next sale (originally purchased for £5.5M 2 seasons ago). He’s a talented young player but having demanded a new contract with excessive wages, we decided to cash in. His replacement, and fellow Argentinian compatriot, Luis Martínez, comes in on a free transfer. We’ve brought in a better player and made a tidy profit too. The young Argentine/Mexican playmaker is a like for like replacement. 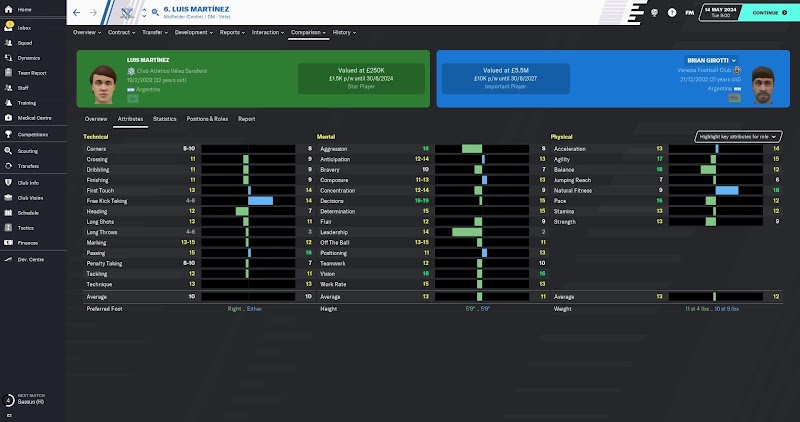 We kept spending down to a minimum whilst managing to bring in a number of high calibre players. Our biggest purchase was that of inside forward, Cristian Díaz, who signed from Club Atlético Rosario Central for £5.25M. With an impressive number of goals over the last 2 season, he’s expected to make a big contribution. 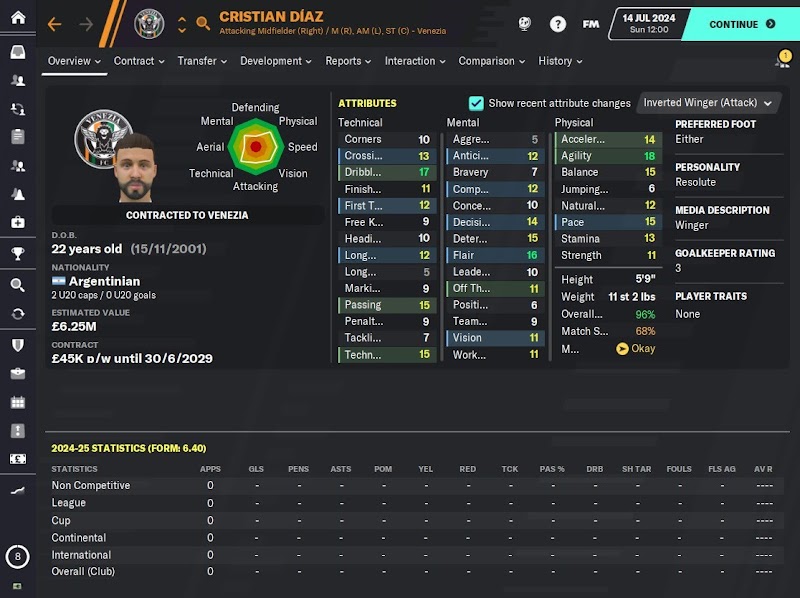 Our only other signing with a transfer fee attached was young Danish goalkeeper, Christian Rieper, who’ll add some competition for Tomás Martinho. Dubbed the new Peter Schmeichel, Rieper has just been called up to the Denmark squad and looks set to make his full international debut this season at just 19 years of age. 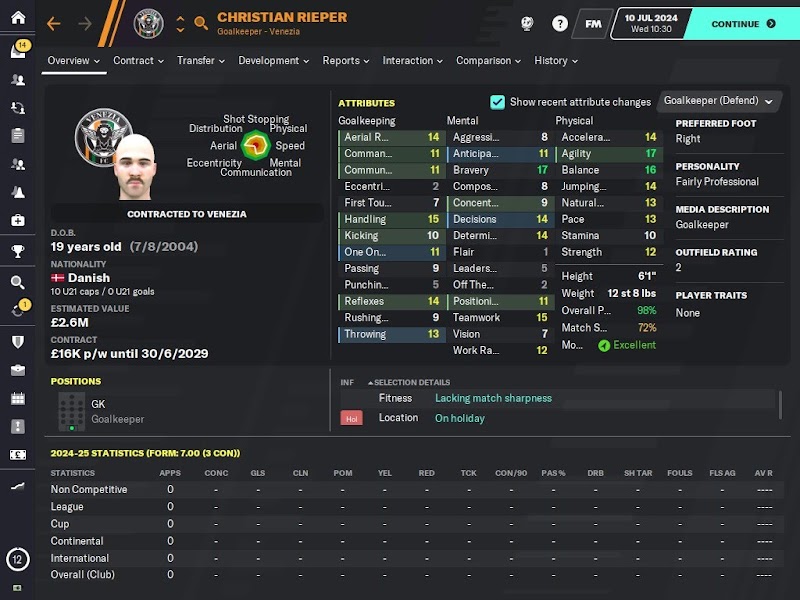 Wonderkid, César Blanco (the next Fernando Torres), joined permanently on a free transfer after a 2 year loan spell from Inter. Turning down offers from far bigger clubs, he opted to join one of his favoured clubs. 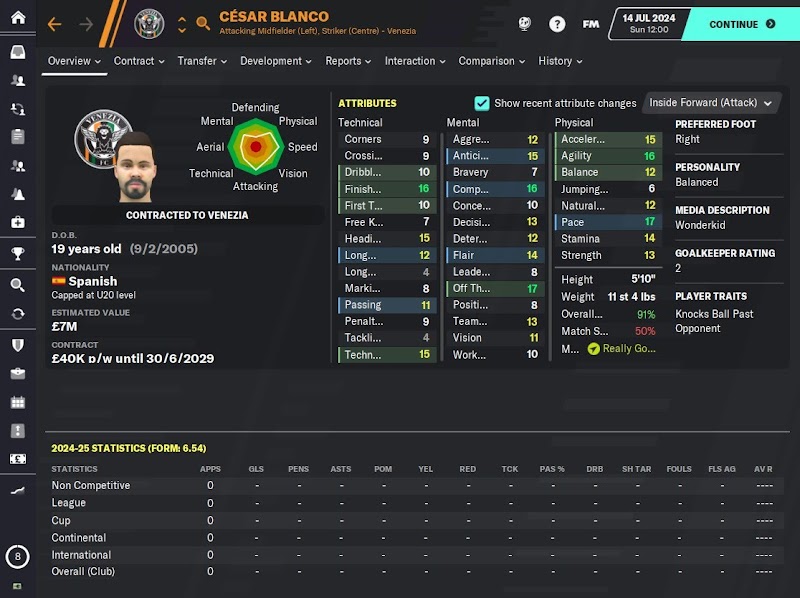 The remainder of our transfers come in on free transfers and two loan deals, including an Italian wonderkid striker, who’ll give Rafa Mir some competition. 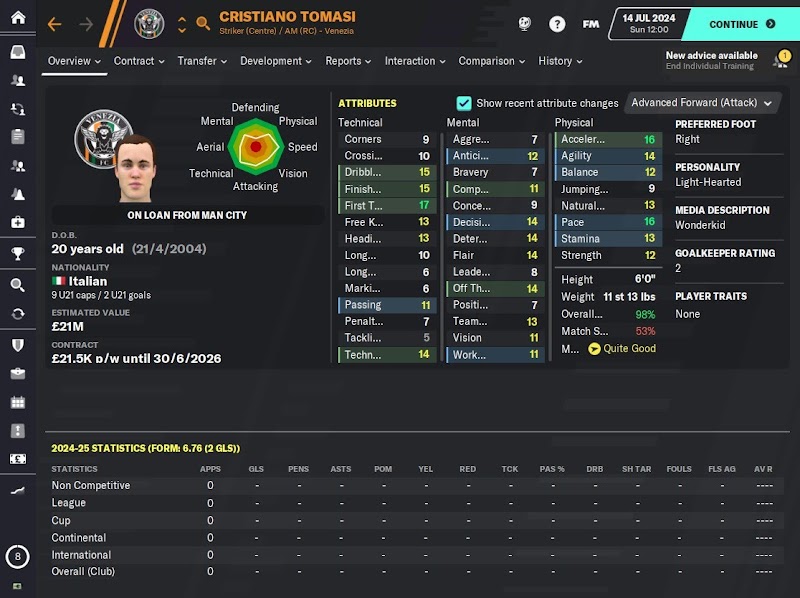 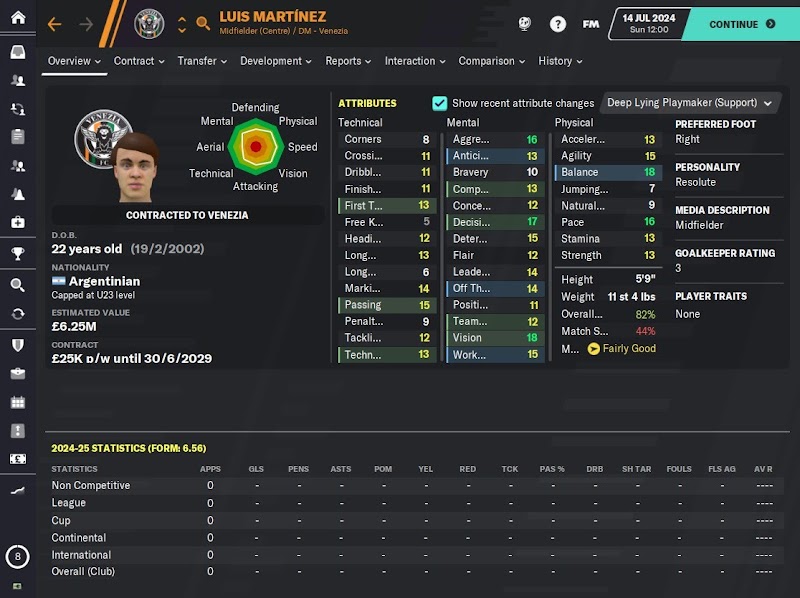 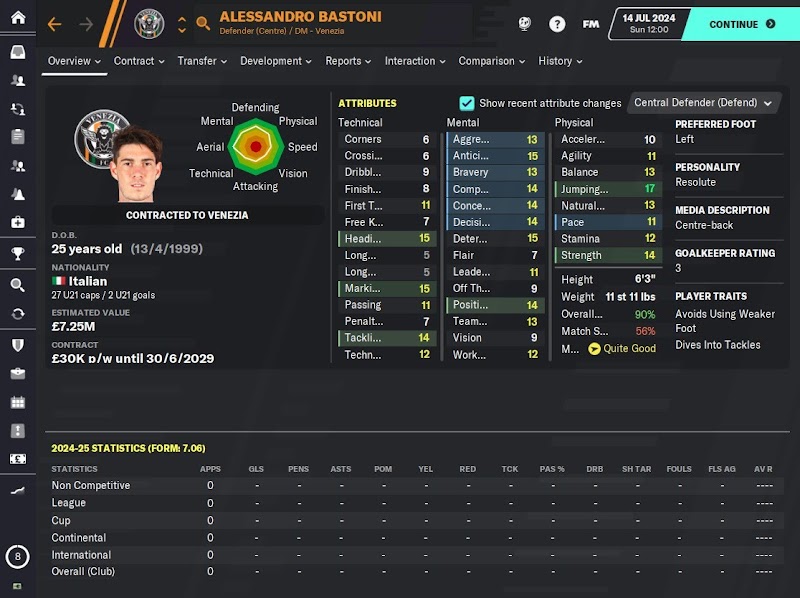 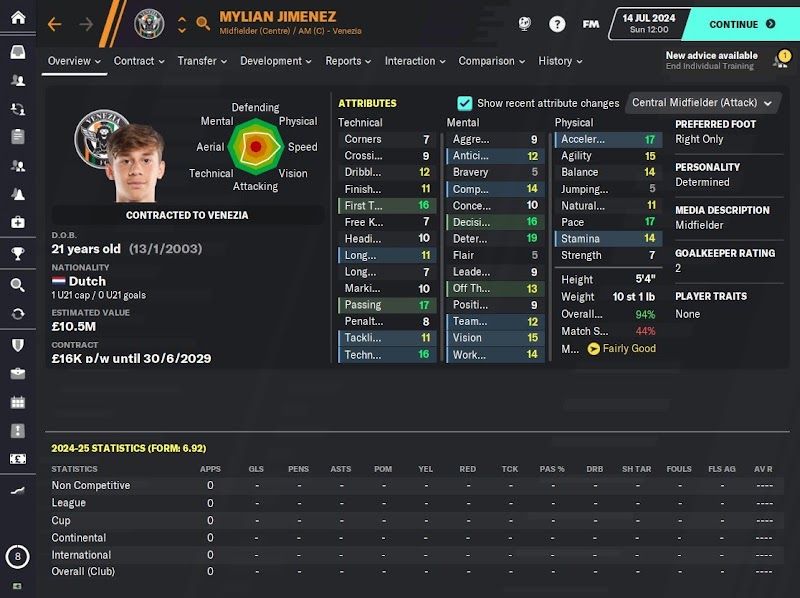 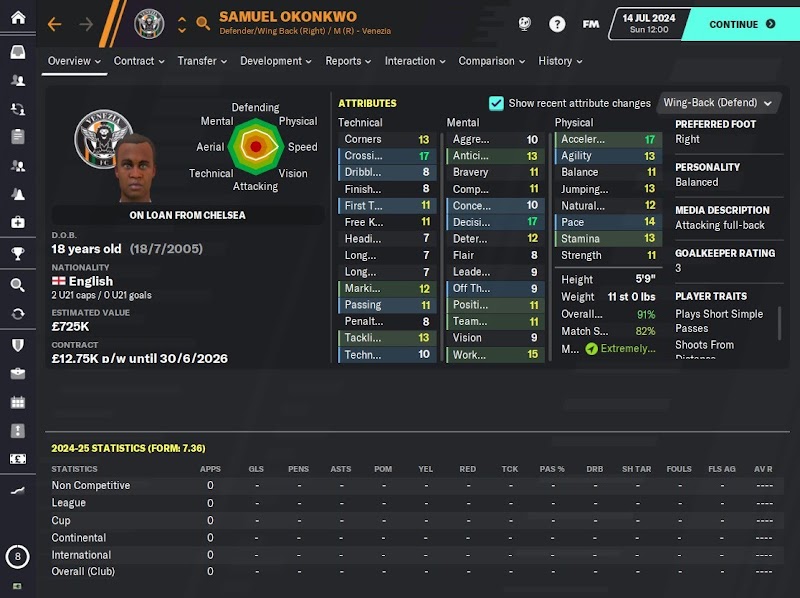