A beautiful moment in the beautiful city of Venice. With expectations of a top half finish, a strong second half to the season pushed Venezia into playoff contention (top 8). With an incredible turn of events, with results going our way across the board, the winged lions pipped second place on the final day of the season, securing an unlikely automatic promotion spot.

That final day magic that sealed our promotion – a wonder volley from right wing-back Lorenzo Gavioli, followed by a calm and collected penalty from Serie B’s top goal scorer (with 21), Rafa Mir:

In truth, I’d expected Salernitana (who were above us going into the final game) to win their last day fixture at home against 17th placed Cosenza, but they drew. Sadly though, that point wasn’t enough to save Cosenza from relegation. A pre-season friendly is the least we can do to put a few euros in their pocket, for helping us clinch promotion. 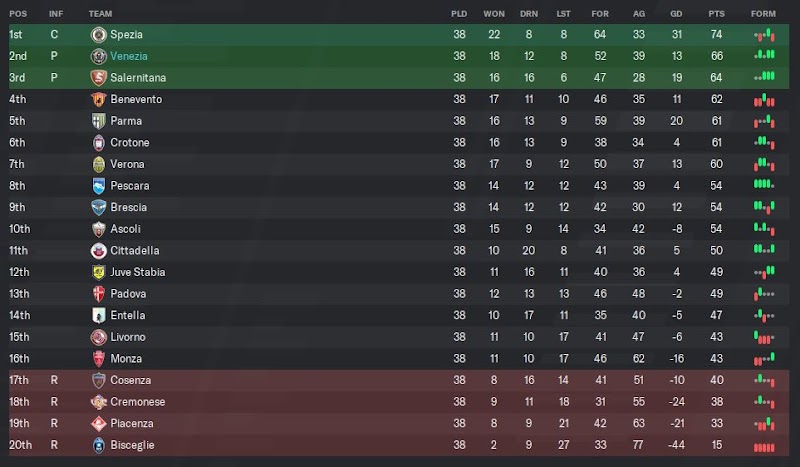 That brief moment of elation, when I looked at the league table and realised we’d gained promotion, was soon followed by the daunting realisation that we’d soon be facing the likes of Ronaldo’s Juventus. At this stage we’re not ready for that, this is very much a development squad. Careful planning and intelligent signings over the summer are imperative if we’re to survive. Even the board (who were 3 points away from sacking me at the start of the season) see our survival hopes as nearly insurmountable.

Attempt to avoid relegation. Be competitive.
Our end of season expectations from the board.

I do have some new found backing from the board though. They were delighted with promotion, offered me a new deal, and set realistic expectations for coming seasons. If we avoid relegation, expectations for the next 4 seasons after that are ‘to continue remaining in Serie A’.They’ve not provided much financial backing, but around 4 million is available to spend. They’ve also sanctioned some longer term projects – increased junior coaching budget and improvements to the youth facilities.

Take a look at our Catenaccio Tactic to see how we’re setup during this series. 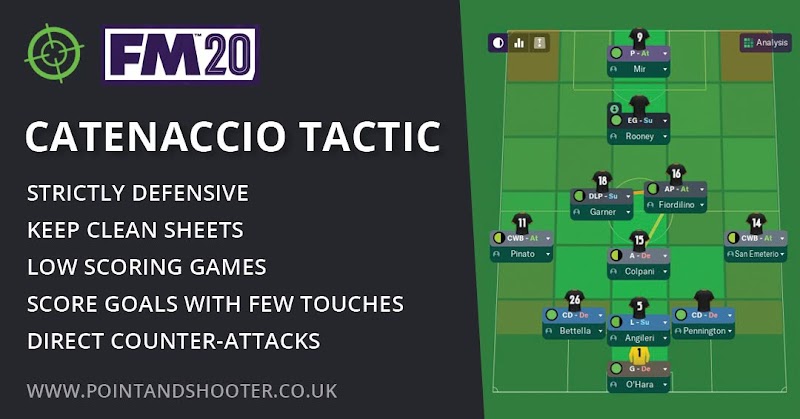 We’ve got a wonderful group of young players (albeit with quite a few loans) who are developing well as a collective. It’d be nice to keep that core group together, but if we can add just one or two experienced and elite players, that would really add to our player dynamic and give us a chance to secure our Serie A status.

Looking back on our recruitment blueprint, I’m targeting an experienced defender who can fulfill the libero role. Someone like David Luiz, who happens to be out of contract soon, would fill that role perfectly, whilst adding quality to set pieces – a fundamental element of our tactics when ‘in possession’. A back up option could include the likes of Charlie Mulgrew – he’s a decent ball-player and an expert penalty/free kick taker.

We’re also in need of some steel in midfield. I’m targeting a player called Fede (to join his brother, Borja San Emeterio) here in Venice. He’s an aggressive ball winner, who’s work rate and determination underpins the values we look for in new players. His £6.75M buyout clause could put that move out of our reach though.

Our opening fixture will be at home against Empoli who finished 15th last season, followed by Atlanta (7th) and Spezia, who won Serie B to join us and Salernitana as the promoted teams.

Wish us luck for the new season, we’re going to need it.

We didn’t quite get our primary targets over the line, though we did manage to sign Fede later in the season. He’d join up with the squad in January for a bargain £725K. 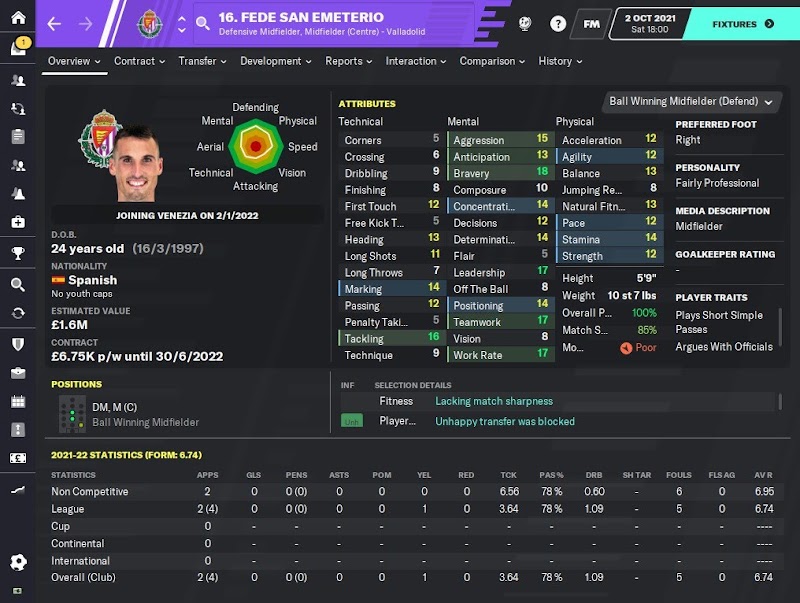 We also managed to snap-up 35 year old veteran striker, Wayne Rooney! He’s past his best of course, but he’s still a weapon with that passing range, vision and long range shooting. I see him playing centrally, as a deep-lying playmaker sometimes, as a number 10 other times. 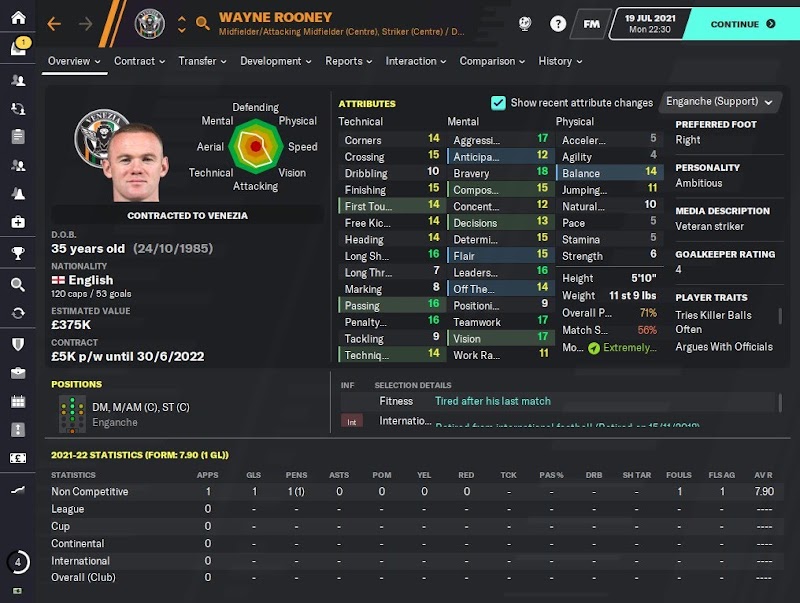 Failing to attract a high calibre libero, I opted for a more ambitious project. Searching out a player with excellent passing and tackling abilities, I brought in young (22 years old) Latvian midfielder, Aleksejs Saveljevs, on a free transfer. This little project will involve retraining him into a defender with a libero role. He’s got some of the key attributes in his locker already, plus time to develop in to the role. He’s been around Italian football for the last 4 seasons so that, along with knowing the language, should help him to settle quickly. 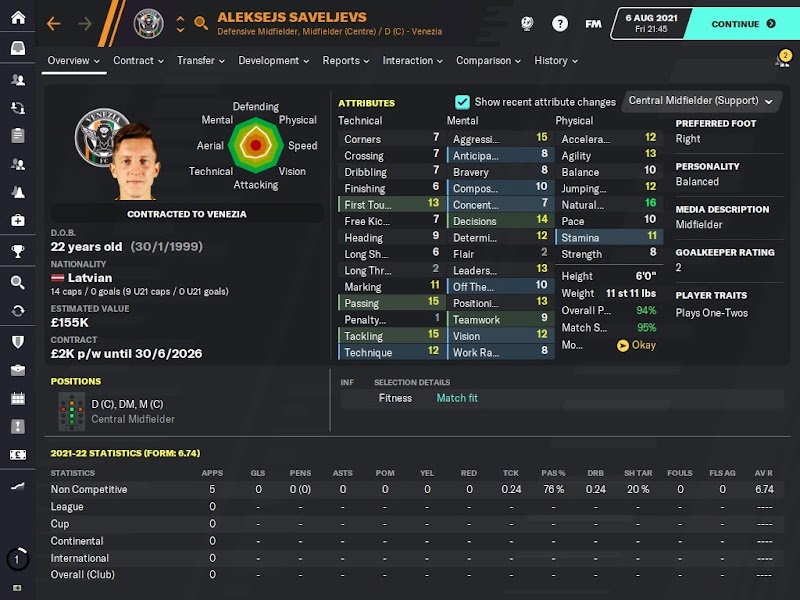 Ex-Everton man, Matthew Pennington, was our only other noteworthy signing. He fills the void left by last season’s captain, Marco Modolo. 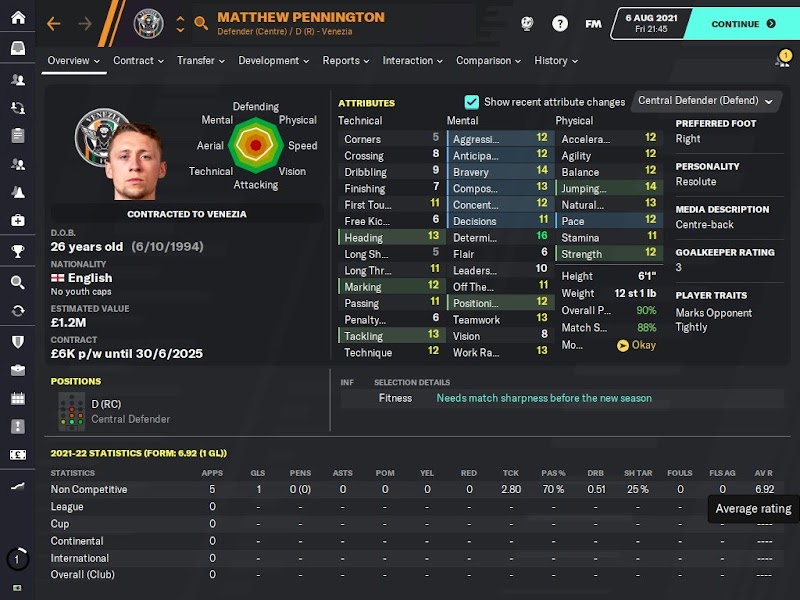