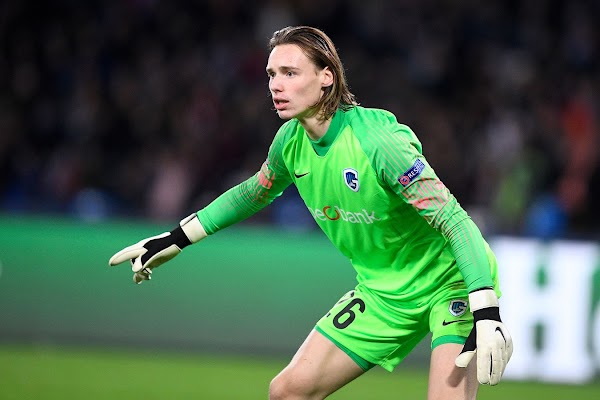 Well, it doesn’t get any easier!

Having finished mid-table last season (10th, with 48 points), on what was our debut season back in Serie A, we followed that up with a slightly lower 14th place finish with 47 points, just 1 point less than last season. It feels like a step backwards, but survival was the primary objective, and we finished well clear of the danger zone. I have to remember to keep things in perspective – we have the smallest ground in the league and the lowest wage bill. We’re punching above our weight.

The season was wrapped up in style with a 1-0 win over champions, Juventus. They rested some big names but still… it’s always nice to finish the season on a high and send the fans home happy. The big headline though is our summer acquisition of Gareth Bale! Which I’m absolutely buzzing about. We’ll cover that further on, along with an update on the new stadium. 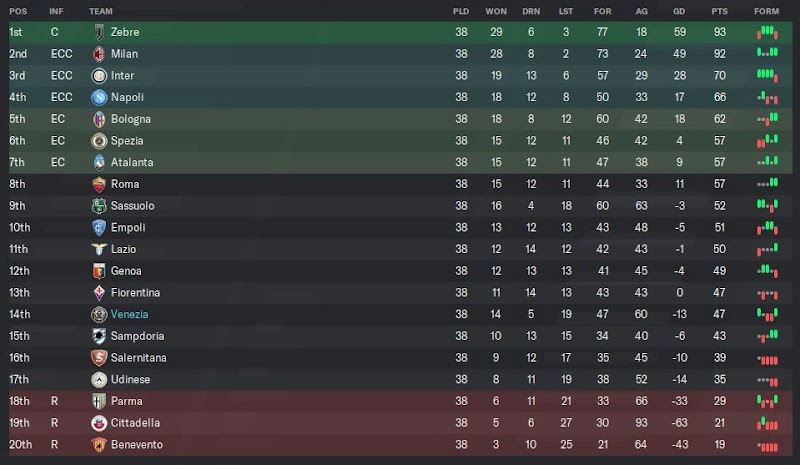 A top quality strike by Fiordilino, our captain, as he scores a deftly executed finish from 18 yards during Venezia’s 3-0 win over Parma.

Our average attendance this season was 7,446 out of 7,450 (99% full). We certainly need the new stadium that’s in the pipeline to boost revenue and cater for our increased fan base. The next bit of news on that – the size and name of the stadium have been confirmed. The Walter Novellino Arena will house 16,727 and is due for completion on 28/06/25 (in 2 years time). The club have taken out a loan to help finance the £33.5M project, but financially we’re very stable (rich, in-fact).

£3.7M has also go into upgrading our training and youth facilities. 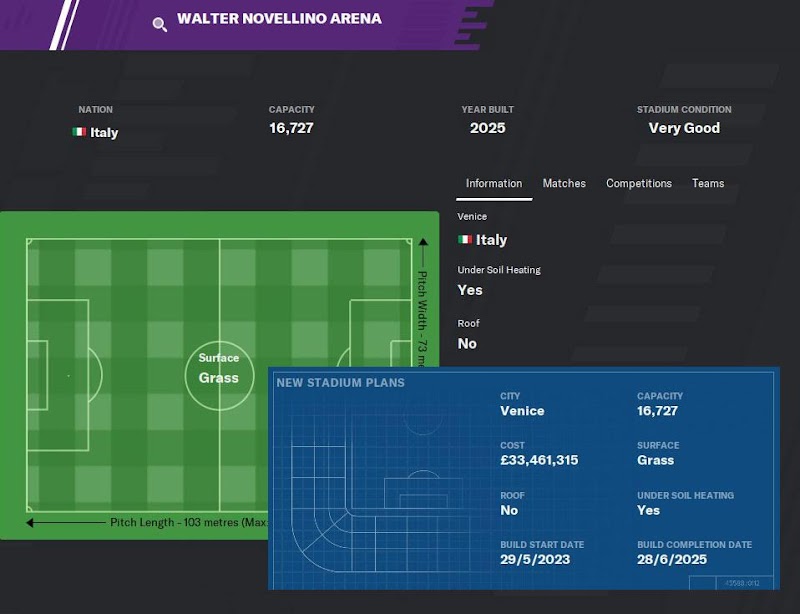 The plan is to persevere with our catenaccio tactic, but with our new star signing (Mr Gareth Bale), I’ll be looking to make the team slightly more expressive. Thoughts to trial out over preseason include: 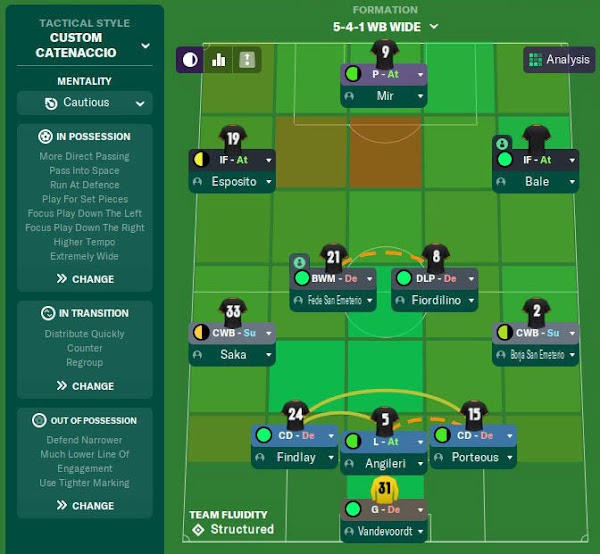 A potential new look for season 5

Having successfully avoided relegation for two season in a row (finishing mid-table on both occasions), the board now want us to aim a little higher – expectations are to attain a mid-table finish next season, and aim towards being ‘the best of the rest’ by 27/28 (in 5 years time).

Record sale – Kieran O’Hara left for Watford for £7M + 25% of next sale. This was a big call at the time. As the current Serie A goalkeeper of the season, we took a big risk in letting him go, regardless of the excellent financial package involved. This proved fruitful however, with Maarten Vandevoordt stepping up to become the second Venezia goalkeeper in a row to win the ‘Serie A Best Goalkeeper of the Season’ award.

Raoul Bellanova, a young and pacey Italian wing-back joined for £275K from Bordeaux. We’ve lacked for homegrown talent, so this a pleasant deal to get over the line. 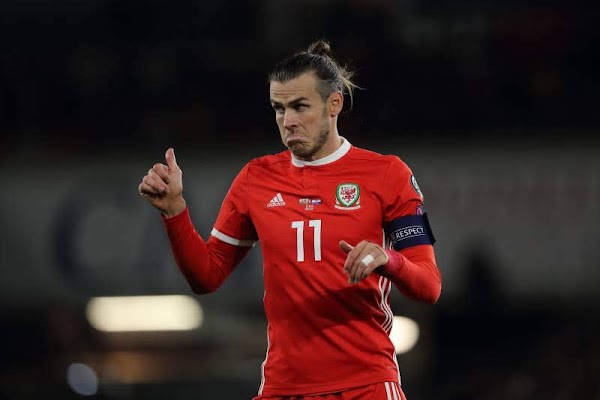 The marque and headline signing – 34 year old veteran winger, Gareth Bale, joins on a free transfer (£650K signing on fee) on a 1 year deal! The biggest signing in Venezia’s history. He currently plans to retire at the end of the season. His wages are considerably higher than the rest of the squad (£65K a week compared to the next highest – 25K, but we can afford to do that as a one-off for the time being. One big name signing like this could be a future strategy, if we can continue to attract players of this quality.

After 4 years on loan, Libero, Antony Angileri (could be the next Fabio Cannavaro) moves permanently for just £900K.

Kieron Bowie, a young Scottish workhorse of a winger, signs from Aberdeen for £600K. He has incredible potential and I’m aiming to give him some first team action this season as a squad player.

We also signed a few talented youngsters to develop for the future. 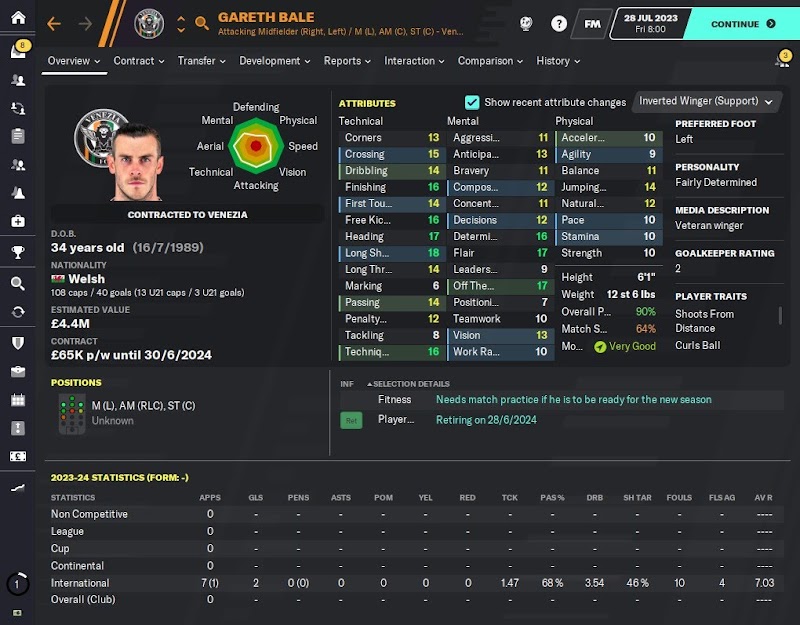 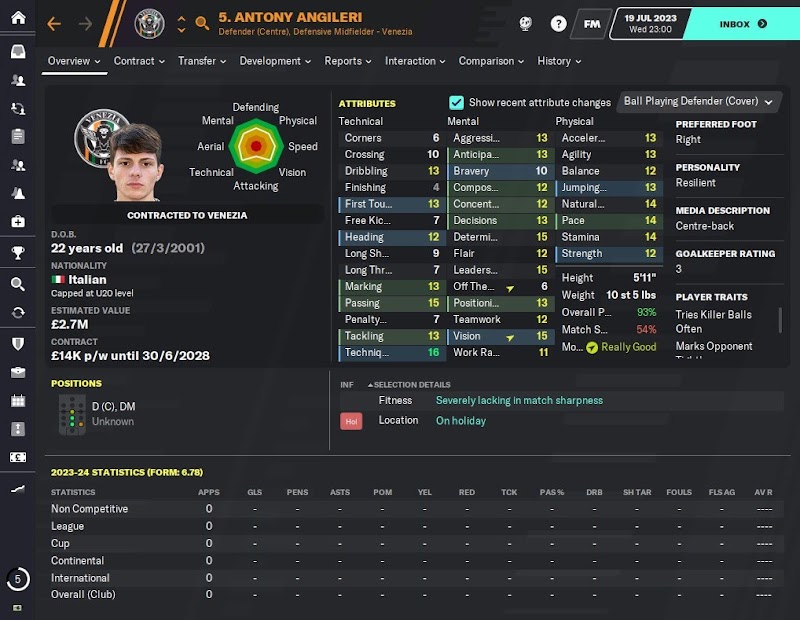 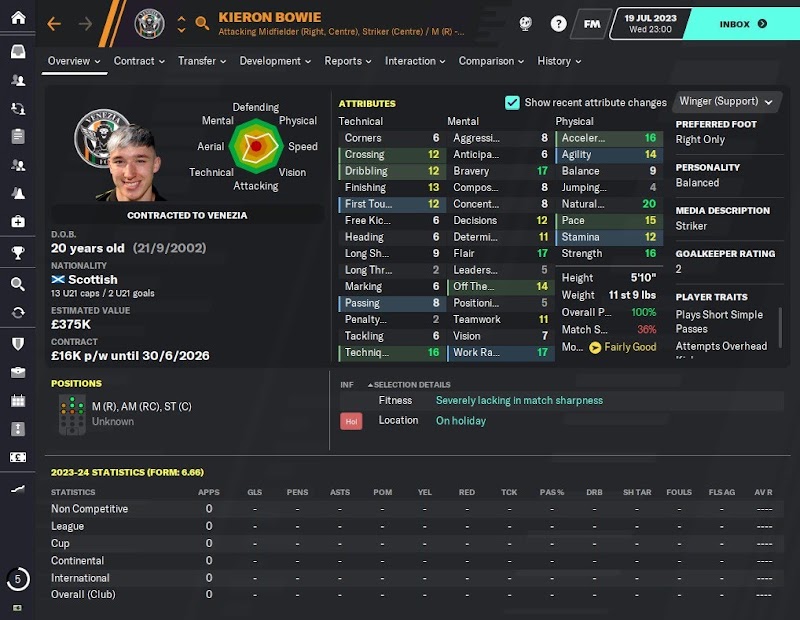