A major injury ruled last season’s talisman, Albert Braut Tjåland, out of the start of the season, leaving us with a tough start to life in the First Division. But up stepped Peder Oterhals Bachmann, a young striker who’s loan move we made permanent this season on a free transfer. He’s a top finisher but needs some work on on his all-round game. He’s progressing well though, filling Tjåland’s boots and then some; finishing the season with 17 league goals from 27 starts, and 21 goals in all competitions (including a few hat-tricks). Choruses of “du nu nu nu nu nu nu nu Bachmann!”, were regularly heard from the home crowd this season, to the theme tune of Batman (or just from me sat in front of my computer). An instant cult hero makes his mark. 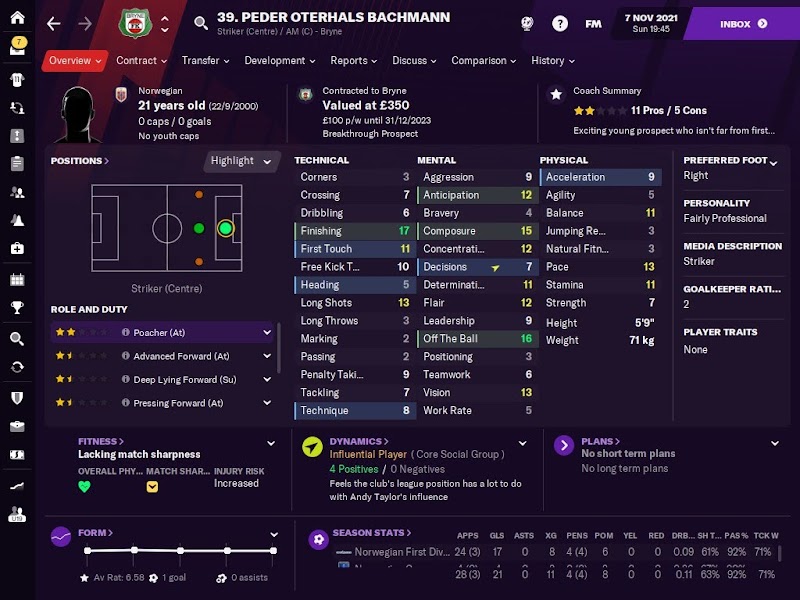 The board’s seemingly lofty expectations of a mid-table finish were surpassed, with a 2nd place finish earning us back to back promotions and a place in the Norwegian Premier Division, albeit on goal difference. Coincidentally, this Graham Potter inspired save has so far mimicked his time in Sweden with Östersunds, with two promotions in the first two seasons.

Tactically, we’ve followed these Graham Potter-esque tactics – utilising the 4-3-3 formation during season 1, before familiarising ourselves with the 3-5-2 in season 2, after we’d acquired the players capable of filling those roles and having the flexibility to work well in both formations. It’s working well for us and we’re dominating possession in almost every game.