It was a tough old season but our survival was secured (just about) with only 2 games to spare. We actually had a solid start to the campaign, notching up a good few wins in the first half of the season, but waver we did, with a poor run of form anchoring us towards the bottom of the table for the run in. We struggled for points, but ultimately finished on a high; thrashing bottom of the league 4-0 on the last day of the season to put an end to a winless run of 10 games.

Our Italian shot-stopper, Matteo Voltolini, was our best player, which sums up our season quite well. He kept 15 clean sheets in the league alone, and we finished with the 3rd best defence in the league. Our problem was a lack of goals though (a club record low of 23 for a season, and the lowest in the league). 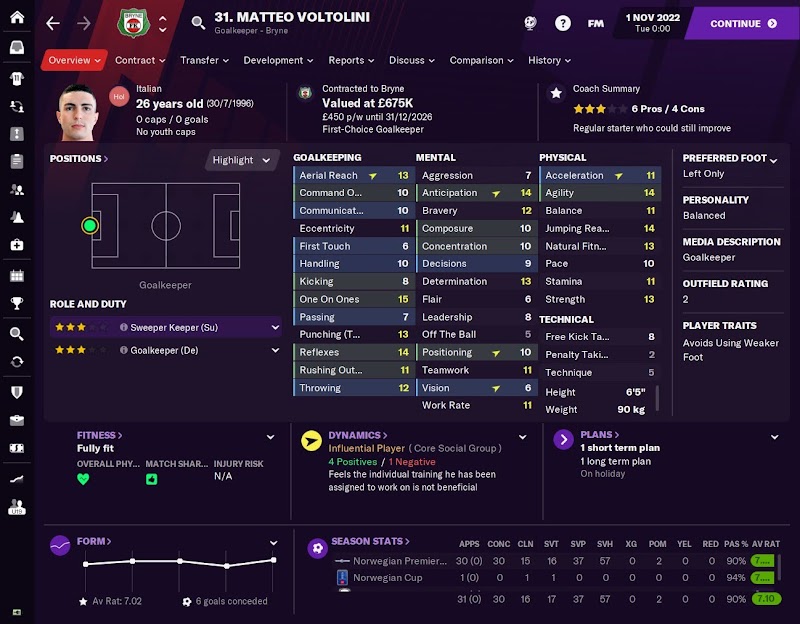 We failed in our attempts to extend Albert Braut Tjåland’s loan deal from Molde before he left for Brugge, Belgium, in a transfer deal worth £925K. Our chances of making him a permanent member of the squad one day and building a team around him, are looking highly unlikely now. We move on without him.

Unfortunately, as our overall lack of goals suggests, it was a season to forget for last year’s star striker and cult hero, Peder Oterhals Bachmann. Just 2 goals compared to 17 last season. Still young, still learning his trade, I’ve decided to send him out on loan next season, to help him rediscover his form. I’m hopeful that he’ll come back better than ever to make an impact in the Premier Division. A season with Sotra in the Norwegian Second Division Group 2 should see him develop and bag some goals. Bachmann Forever.

For next season, we really need to try and up the calibre of players in the squad wherever possible. Incomings include Tom Ince on loan.

The bank balance is looking healthy now, thanks to the benefits of playing top-flight football.

Board expectations remain: attempt to avoid relegation. It would be nice to make some progress and finish in a higher position next season, or accumulate a higher points total, but securing our place in the division is the primary goal once again.