Having spent the last few editions of FM picking out tactics that suit a certain style or culture befitting a club or country, this time I’m going to be encouraging football the way I like to see it played. A purely original ideology and set of beliefs.

So what do I like to see from a football side…

I like to see control – play a fairly patient build up game in possession but encourage crossing from the byline once higher up the pitch. I like possession, but possession with intent and purpose. Passing the ball back and sideways to increase the stats drives me mad. I prefer a slightly more attack-minded (positive) mentality, so still solid at the back. I like my team to press aggressively higher up the pitch, to harass the opposition out of possession.

I like a team that’s good on set pieces and a big man upfront with pace around him. I’m a fan of 3 at the back with a ball player. Flexible, so we can go with 2 centre-backs and add an extra man in midfield or attack if needed.

The playmaker is possibly my favourite role. I want my team to distribute the ball to him during transition so he can dictate the game. I like a more aggressive Roy Keane ‘type’ of player in midfield as well.

I’m a fan of height and heading ability too so we can be/become experts at set pieces. With that extra height often comes a lack of mobility, to counter that, and be weary of counter attacks, I like to see my team hold their shape and sit relatively deep (so not to be outdone by sheer pace).

That’s a lot of thoughts and ideas, so lets put it into something more visual! What you can hopefully see here is the flexibility this tactic gives us without the need to change personnel. At any point in the game we can bulk up the midfield, stick and extra man up front or in defence etc, so we can manage a game / change things up at any time, without necessarily having to make a substitution. 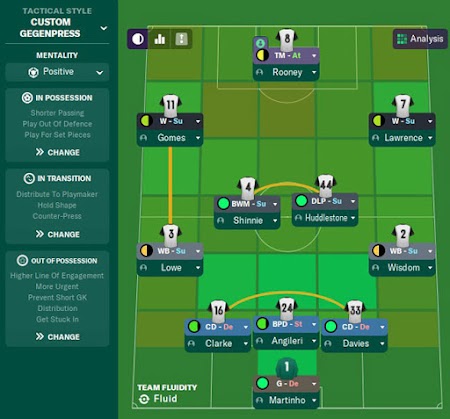 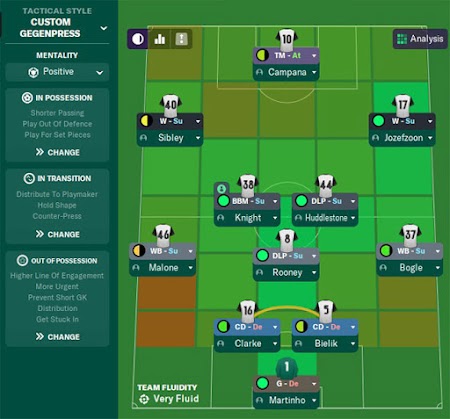 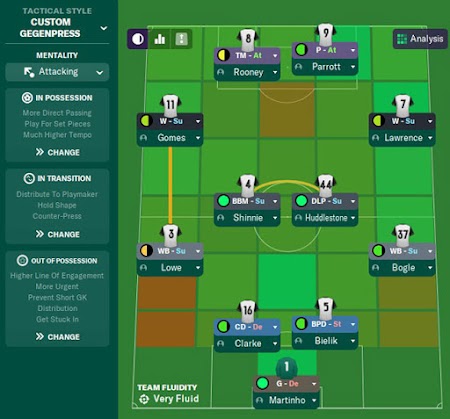