It was a standout season for my Derby County side during the 2020/21 campaign, my second season at the helm. We won the Championship and racked up the following awards along the way: 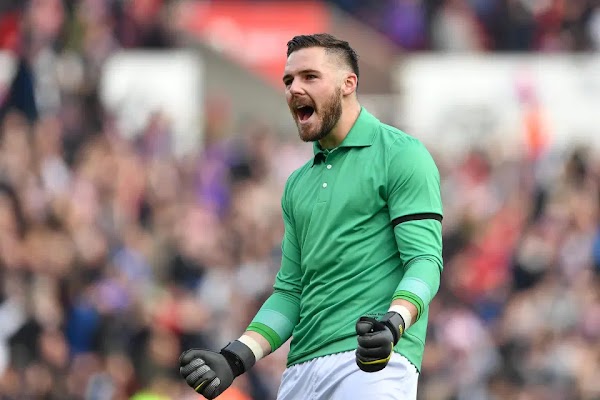 We’ve re-written the history books and our number 1, Jack Butland, holds the record for the most clean sheets in a season (26), beating the previous record of 25, held by Marek Rodak of Fulham. It’s the clean sheet record I’m most pleased with from that list but it wasn’t something I’d set out to try and achieve pre-season. You might be thinking, “you must have played a very defensive game to get that many clean sheets, right?” The answer’s no, in fact, we only played with two defenders and just one striker – it’s the midfield that that really made the difference for us.

Using the ‘Aggressive Press and Control‘ tactic, we played possession football, but pressed the opposition aggressively when out of possession, helping us retain the ball quickly and build up our next attack. This domination of possession resulted in few chances for the opposition (they barely touched the ball), but it wasn’t possession for the sake of a few nice-looking stats, it was possession with a purpose. Our intent was to build up attacks with high quality passing, with a combination of wing-backs, wingers and inside forwards stretching the opposition with runs and dribbles. Our play out wide resulted in many crosses, hence the target man up front, and that’s how we’d score the vast majority of our goals – from crosses or through balls, with a few from set pieces too. The midfield boasted the likes of Rooney, Huddlestone and Bellingham, so we were blessed with creative central midfielders with wonderful passing ability and vision, that was pivotal for me.

Having a top quality goalkeeper makes a big difference too, and I was fortunate in that respect. Stoke found themselves relegated at the end of my first season in charge and Jack Butland became available for a bargain £3.9M. I snapped him up, and he was ever present for us the following season, missing just one game, in a season that saw us finish top of the Championship and claim that elusive clean sheet record. Our defence was ever present too, and was rarely rotated. I had just four central defenders in my first team squad, so was fortunate to avoid any major injuries, but a regular central pairing in front of our stopper no doubt helped as well. Strong partnerships were created all of the pitch, built up over time with regular game time for a relatively small squad.

We were close to the Championship record for most points in a season too, but fell short by just a couple of points. 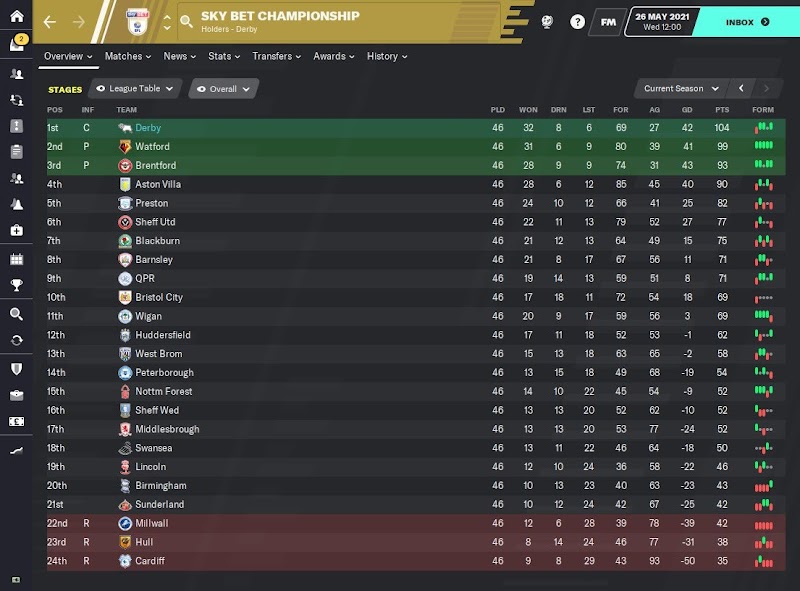 Board expectation: fight bravely against relegation.

Championship Player of the Season, Fan’s Player of the Season and captain Wayne Rooney retires (becoming a full time coach) along with vice captain Curtis Davies who also retires. Paul Scholes will be joining Wayne on the coaching team. The experienced Tom Huddlestone remains an important member of the squad and dressing room with another year left on his contract, he takes the armband. Losing Rooney is a big blow, but with the likes of Bellingham and Blesa developing into fine young players, we’ve got some talented players to step up.

The board offered a transfer budget of £35M to help avoid relegation. We spent a good portion of that, but our net spend was actually very low as some players were moved on for a profit.

Having done so well defensively last season the sale of Krystian Bielik is a potential banana skin for us. He wanted to leave and the price was right, so we moved him on. We’ve brought Pablo Mari in as a straight replacement, who I think is a better player, and for less money, but we’ll need to re-build a new understanding between our defensive duo.

Eberechi Eze is our big money signing. Joining the likes of Jude Bellingham, we’ve got some of the most sought after home-grown talents, something I wanted to do as the likes of Rooney hanged up their boots. That also prompted the signing of Nemanja Matic. We needed an extra body in midfield but he was also signed for his experience. He goes against the board’s vision in terms of age profile but his versatility and experience are up their with the very best, not to mention his pedigree. A two year deal gives us time to find a younger, longer term option.

Cosgrove gives us an extra target man option and I was surprised by just how good his stats are; he could be absolutely lethal from set pieces. Fede’s optional future fee clause has been activated, making his stay permanent. At £3.5M this represents really good value for a player worth £7M.