My biggest decision pre-season was to controversially splash £975K on 16 year Portuguese goalkeeper Tomás Martinho from Benfica, and make him my number 1. He hasn’t let me down though – consistently decent performances, a fair few clean sheets, and an important penalty save to win us 3 points at Brentford have all evidenced that. He’s developing well and hasn’t been overawed by my fast-tracking him into the first team. His 18 clean sheets this season is a new team record. 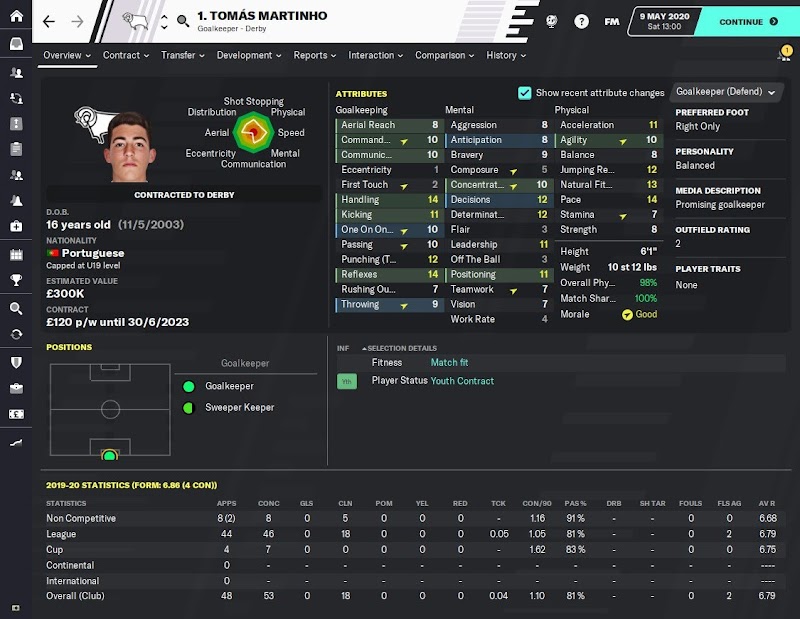 With my tactical decision to go with a lone target man un front, there was a fair bit of movement in and out of the club. Waghorn moved to Portland on a £500K loan deal with an option to buy, and both Chris Martin and Jack Marriott were transfer listed. Young strikers Troy Parrott (from Spurs) and Leonardo Campana (from Wolves) came in on loan.

We started ok, having drawn our opening 3 fixtures against tough opposition (Huddersfield, Swansea and Stoke), but a lack of goals and performances from our strikers forced me to use Rooney (Fan’s Player of the Season) as a striker. I had planned on using him in the middle but it was a needs must decision. 3 goals in his first 5 starts showed exactly why he has 53 international goals to his name. Short of pace, it was important to have legs around him, so he wasn’t nullified by a high defensive line.

A League Cup exit to rivals Leeds in the 1st round didn’t go down well with the board (we got our revenge by thrashing them 5-1 later in the season), who expected a minimum 3rd round finish, so we had it all to do in the league. A decent run after that, beating the likes of Bristol, Brentford and West Brom pushed us right up the table. 3 draws followed by 3 wins put us in an early playoff spot of 6th place after the opening 6 games. A great start. But, a tough run in October/September left us 5 games without a win and we slid into the bottom half. A positive team meeting spurred the players on for the next game with a vital 3-1 win over Preston, but more bad results followed and questions were being asked by the media.

I’d clearly left us a little short upfront in terms of experience, and a lack of goals was obviously impacting results. In came Jordan Rhodes for a bargain £120K during the January transfer window. He made an incredible start to his career at Pride Park with 8 goals in 8 games, including a stunning debut hatrick. Real ‘Roy of the Rovers’ stuff. Unsurprisingly, he won the Championship Player of the Month Award for January and many were calling for him to be recalled to the Scotland squad. He finished the season with a very impressive 15 goals from 24 games (a new team record). My signing of the season by far. 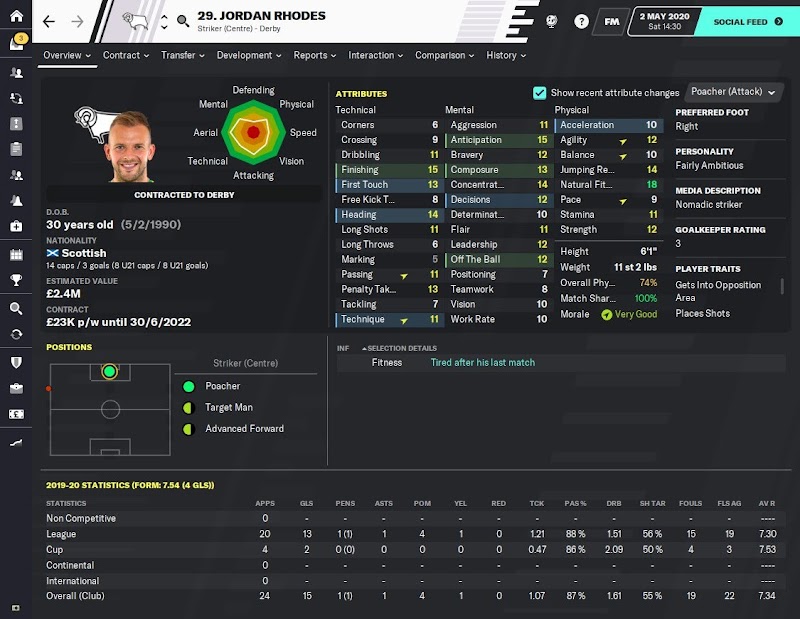 Mason Bennett was recalled in January and given a new, long term contract. I see him playing an important role long term, but his involvement will be staggered and gradual, once he overcomes a long term injury. With a fairly low ‘option to buy’ clause in his loan deal, there was a strong likelihood of us losing him to Millwall if we didn’t act.

We made 2 other signings during that window. Fede San Emeterio joined West Ham on deadline day and was immediately loaned out to us (that’s now been extended to next season as well). We also spent £1.3M on a talented young playmaker – Álex Blesa from Levante (a potential successor to Wayne Rooney or Tom Huddlestone). His playing time was carefully managed and he put in some great performances. He scored his very first senior goal too, which ended up winning the Championship Goal of the Season! I’ve got high hopes for this lad. 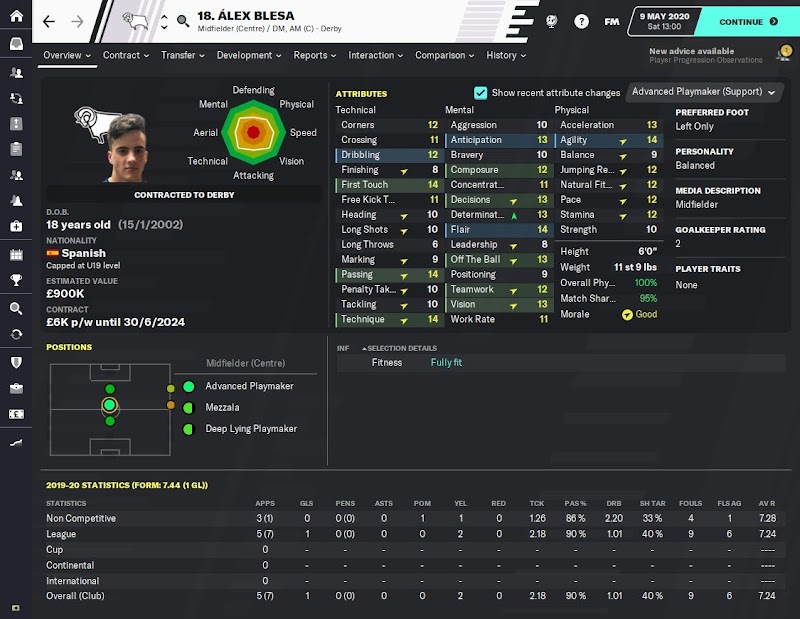 We’ve also done some great business to move Duane Holmes on to Atlanta United for £5.75M, plus add-ons. He leaves at the end o the season.

Some further bargain hunting confirmed the signing of 6’5″ central defender Sean Raggett from Norwich for £230K. He’ll join up with us next season when Matt Clarke’s loan deal comes to an end and he returns to Brighton. That’s gives us a left footer in that left sided centre-back position, and a serious threat from set pieces. 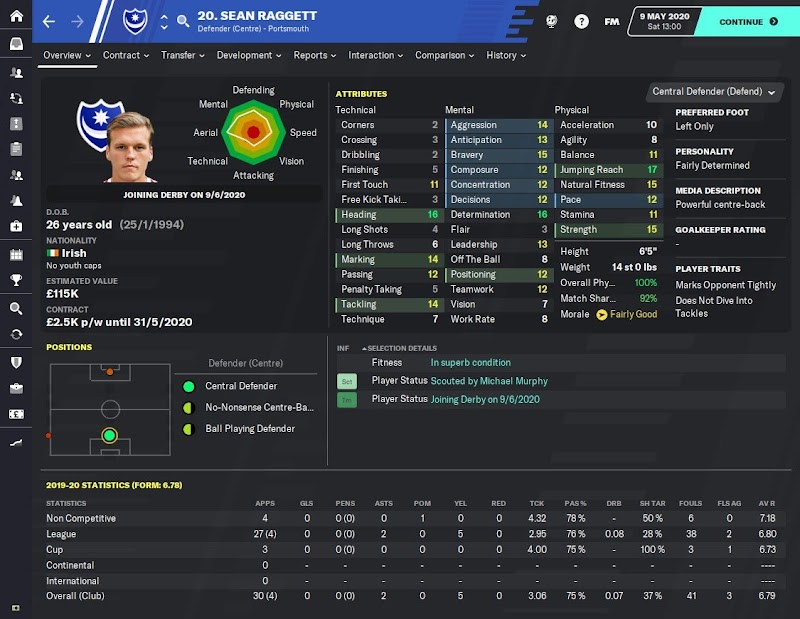 Come the end of January, after 30 games (with 15 to go), a great run of results pushed us up to 10th. The players were really coming to terms with our tactics in terms of familiarity and execution.

What I’m liking about my current tactics is the flexibility the extra man in defence gives us. The ball player can push ahead of his partners (almost like an extra midfielder), but in desperate times I can drop a defender for an extra striker, and still maintain our general shape. Take our 1-1 draw against Cardiff, trailing to an absolute worldie of an opening goal, I switched it up after 63 minutes by sacrificing that 3rd defender for young Troy Parrott, on loan from Spurs. Raring to go after just picking up his 1st cap and goal for Ireland at 17 years old, he joined Rooney up top (this was pre Jordan Rhodes). We upped the tempo and went more direct. It took a while to break down a stubborn Cardiff defence but eventually, on 92 minutes, a lovely cross from Parrott landed on Rooney’s head from 12 yards out to rescue a point at the death. It’s moments like that you savour. 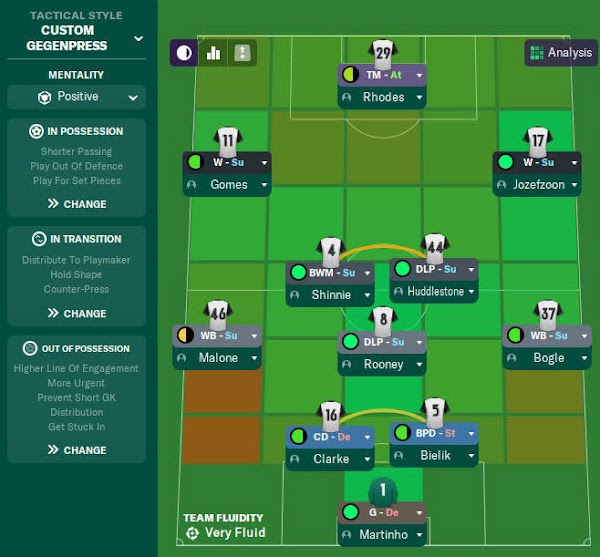 Eventually, we adjusted our default setup to 2 at the back and an extra midfielder. Performances improved and Rooney was able to dictate games from that deep lying playmaker position just in front of the defence.

We’ve been great at home (we’ve turned Pride Park into a fortress) but our away form had been pretty horrendous during the first half of the season. Switching to a balanced mentality for those away days post January really helped us better manage those games, coupled with the impact of our new in-form striker of course. He couldn’t stop scoring!

The FA Cup made up for the League Cup disappointment with a magical 2-1 extra time win over Premiership side Leicester. Jordan Rhodes, that man again, scored a wonderful solo goal to set up a quarter final showdown with Chelsea at Stamford Bridge (we lost 4-1!).

Ultimately, it’s been an up and down season with both highs and lows. So much so that ex-player Will Hughes felt the need to question us in the press one minute, then praise us the next, all season long. Needless to say he’s gone down in my estimations! A final mid-table position of 11th with 68 points wasn’t all that bad and kept us well clear of a relegation battle (meeting the board’s target for the season). A good platform to build on. In the real world, Phillip Cocu’s men fin ished the season in 10th with 64 points – One place higher but 4 points fewer. They made it to the 5th round of the FA Cup and the 2nd round of the League Cup.

The wage budget for next season is a tidy £15.93M, and the board are expecting another top half finish, playoffs the season after. 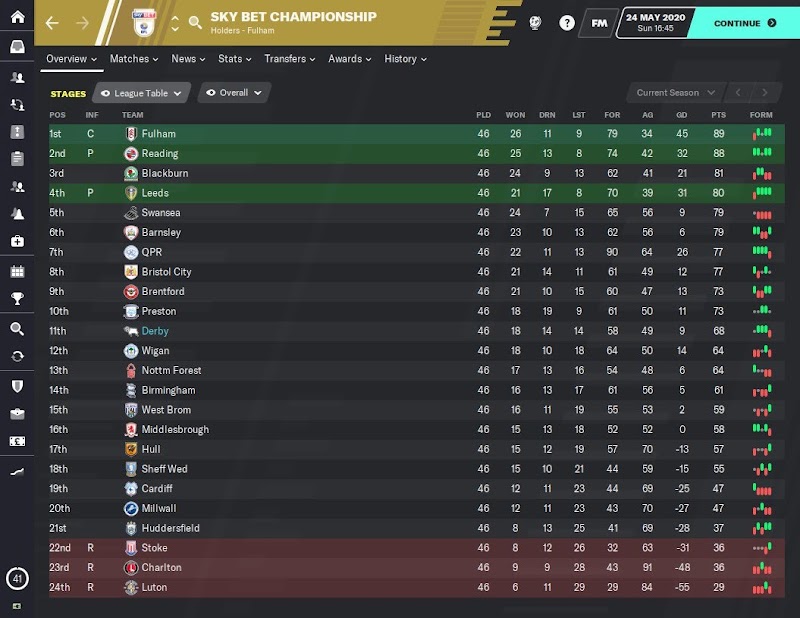