A strong start to the season continued throughout, with 8 points from a possible 12 (2 wins, 2 draws) against rivals St. Mirren in the Renfrewshire derby games a particular highlight.

It took us two seasons to get promoted from the Championship, but just one season in the Premiership to secure a European place. After 33 games we finished 4th, at which point the division split, leaving the top 6 to battle out the European spots and the bottom 6 to battle against relegation. Those were tough games of course, but we came out of it well having leapfrogged Hearts to secure a final end of season position of 3rd.

Celtic (champions) and Rangers (runners up) finished way ahead of the pack, as you’d expect. There’s still a long way to go to close that gap, but with European football to look forward to next season, there’s hope that we can attract some higher quality players and up our pedigree. It’ll certainly do wonders for our finances.

The main tactical change for this season was pivotol, and played a significant role during a breakthrough season. It was a simple mentality change, but a much needed one. Last season (in the Championship), we played with an attacking mentality during home fixtures, cautious away. This season, as underdogs in the Premiership, we used a cautious mentality both home and away.

Essentially, we’ve played on the break all season and it’s worked a treat. The major dilemma now is whether to stick with that or revert back to a more attacking philosophy – I’ve decided to stick with it for at least another season, as I don’t think the quality of personnel is going to change enough to justify that. We’ll have European football to contend with too during season 4.

This was academy graduate (and regen) Sam Hunter’s first full season in the first team, and he did not disappoint, clearing up at the end of season awards. Our first choice attacking midfielder scored 14 goals, assisted 8 goals and finished with an AV R of 7.13, having started 41 times for The Ton. 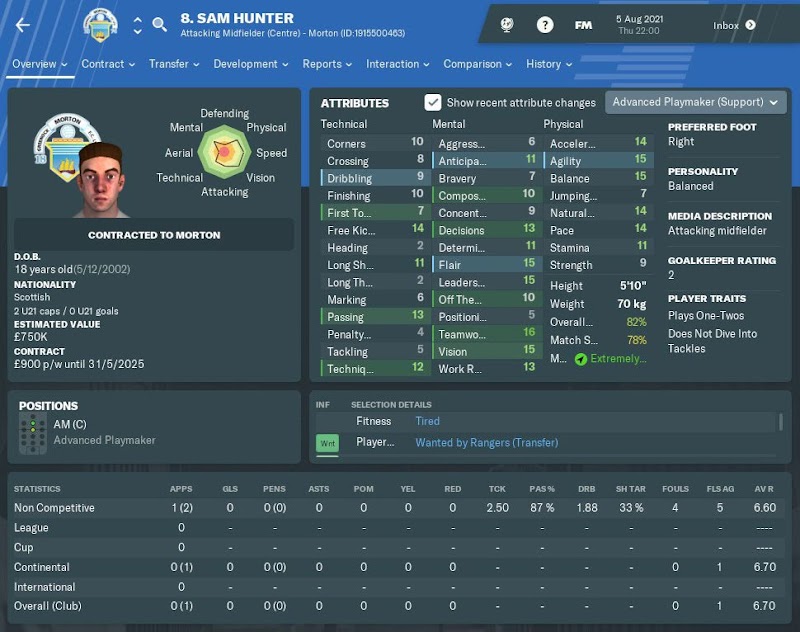 A new long term deal has thankfully scared off interest from Celtic and Rangers. Born and bred in Morton, Hunter is fast becoming the ‘Steven Gerrard’ of this club and is central to our plans going forward. A full international call up for Scotland must be on the cards soon.

Check out his goals:

The progress of Sam Hunter has been covered but it was also the first full season for defender and Young Player of the Season, Rohan Fotheringham. Our 6’6″ giant staked his claim for a place in the first team and hasn’t looked back. He was demanding a new contract at the end of season, with his agent insisting on a pitiful £100K release clause – fortunately I’ve been able to talk him out of it for the time being. I’m happy to give him a new deal, the wage demands are pretty low, but with 4 years left on his current deal, it’s not worth risking the release clause. I’ve no doubt that the lurking Aberdeen would snap him up for a fee that low. Sorry Dons, you’re not having him.

The latest player to graduate from the academy is attacking midfielder, John Brown. Limited to just a few substitute appearance towards the end of the season, Brown is now the youngest ever Premiership goalscorer at the tender age of 16 years and 48 days. 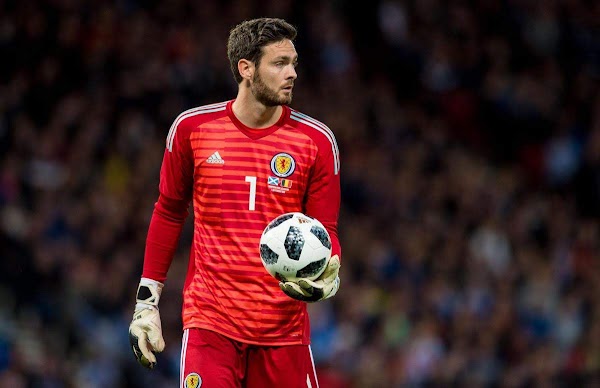 The January acquisition of 37 year old veteran and Scottish international goalkeeper, Craig Gordon, who had been released by Celtic, was a massive coup for the club. He was rock solid during the business end of the season but unfortunately we’ll have to do without him next year – he plans to retire and I wasn’t able to convince him to reconsider. I’ll be on the lookout for a new first choice goalkeeper for next season. With 51 caps, 5 Premiership medals, a combined total of 5 cup medals and various individual awards, he deserves to go down as one of Scotland’s finest goalkeepers.

We’ve been able to fill that void for the new season with another experienced veteran Scottish international, in the shape of ex Blackburn and Celtic centre back, Charlie Mulgrew.

Our transfer policy of signing star names where possible (including foreign players for a little romance and swagger), balanced with signing and developing youngsters to eventually step up to the Scottish national side, has been extremely productive. Acquiring those ready-made top class players has been difficult, there’s still a lack of interest in us from high calibre players, and our scouting range is still very limited, however, we’ve done incredibly well developing homegrown talent. With several Scotland under 21’s gracing the stage at Cappielow Park, seeing some of those talents make their full international debuts feels like a matter of when, not if.

After three highly successful season on loan from Rangers, we’ve finally made Andy Dallas’ move permanent. He’s our record signing at £500K. At 22 years of age and with 42 goals in his last 90 league appearances, it was worth pushing the boat out for the young Scotsman.

Unsurprisingly, our latest batch of signings is predominantly made up of young Scotsmen with international experience at youth level:

Our season starts a little earlier than usual with the Europa League qualification phase. It’s a really tricky looking draw for us; we’ll have to get the better of Croatian outfit, Hajduk Split, in the best placed third qualifying round, to progress on to the fourth round. With teams such as Schalke, Sevilla, Rangers, Lille and Roma in the pot, we’ll do well to reach the group stages. Whatever happens though, we should be able garner some much needed income, even if it is just from a few gate receipts.

Our domestic season starts with a tough opening day trip to Aberdeen. We’ll be looking for a good start to reach our eventual goal – qualifying for European football for the second season in a row. Maintaining that level, improving finances and developing our homegrown talent further, would been seen as progress in my eyes.