With all first team contracts set to expire at the end of the season, contract negotiations were my first major consideration. In some ways it’s a good thing; I’ll be able to release players that aren’t in my long term plans and rid some of those wages, but with a serious lack of finances, there’s potential to lose a large portion of the squad. I had to act on that. For now, I’ve negotiated new deals with our best players (Michael Tidser, Gregor Buckanan etc) and some of our brightest youngsters. For the remainder of the squad, this season will work as an audition, with a reassessment of their contracts to come around December/January. At that point I’ll be able to compare them to potential alternatives who’s contracts are also due to expire. 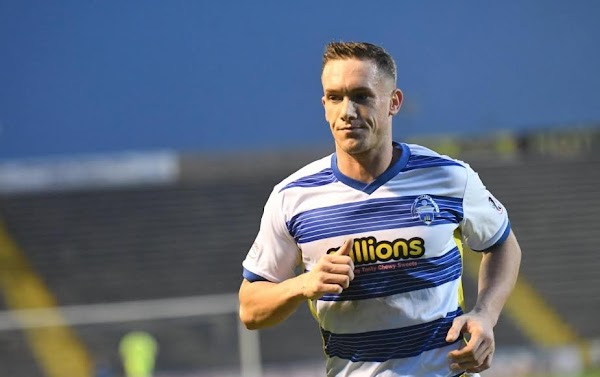 For me, the already mentioned Michael Tidser is the star player in the squad, and pivotal to the style of football I want to adopt. With impressive set piece and goal scoring attributes (free kicks:15, corners:15, long shots:15 ), I expect him to play a pivotal role this season. There’s some quality in defence with the likes of Gregor Buckanan, but we’re a little short on numbers there and that needs addressing.

Lewis Strapp, left wing back, is one of the most talented youngsters in our under 18’s and one to keep an eye on. He’s out on loan this season but I’ll likely try to integrate him into the first team next season.

The remaining squad members are a little on the average side, but we do have a fair number of leaders at the club, which should help with squad dynamics and morale. Tidser, Millar, McAlister – they’ve all got high leadership qualities.

The club didn’t have a single scout on the books, making it difficult to highlight new signings. I’ve brought one scout in for now, to help us target players on the free transfer market, but that’s the only staffing change. With finances as they are, I don’t think it’s worth messing with mutual contract terminations and additional staff wages, not until the end of the season anyway. 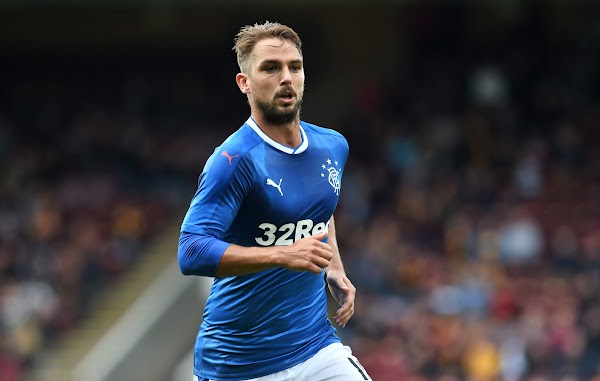 With a serious lack of transfer funds (just £20,000) I decided to shift that over to the wage bill, allowing us to renew some contracts and sign some players on free transfers. The loan market didn’t have much to offer us, of the few players interested there was a serious lack of quality. Attention turned to the free transfer market.

I talked about the need to sign star names in the last post and we’ve managed to make that a reality. Experienced attacking midfielder, Niko Kranjcar, has joined The Ton. Ok, he’s 34 and past his best, but it’s a big coup for the Scottish Championship. He fits our new style of play perfectly too. As a set piece expert, Niko (along with Michael Tidser) should be able to make the most of dead ball situations, contributing both goals and assists.

I touched on developing a more traditional style of football in the previous post, getting back to Scottish roots and having a go at teams. These were the features highlighted: 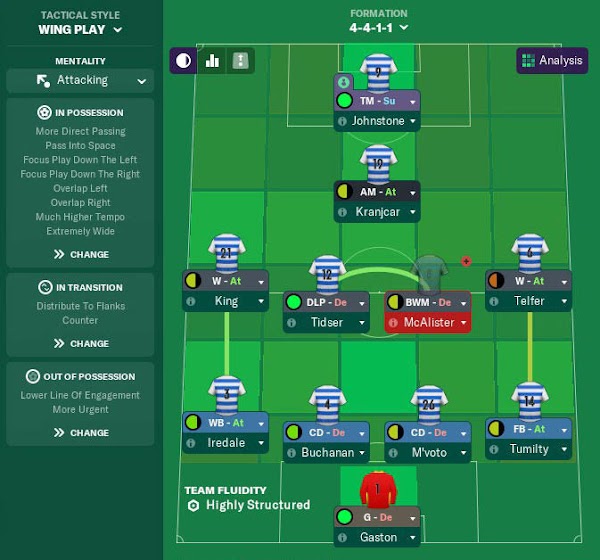 Based on this, I’ve been developing an attacking 4411 wide play tactic, which is built to hit the wings hard. We’ll be relying on the number 10 (Niko Kranjcar) to get amongst the goals, playing just off his more advanced striking partner, though his goals will likely come from long shots, direct free kicks and penalties, due to his lack of mobility. The striker will take the role of a pressing forward or target man, designed to get amongst the centre backs and make their lives difficult. He needs to make a nuisance of himself (think Diego Costa).

The focal point is out wide. Distribution is set to get the ball out to the wingers, who’ll look to attack the full back areas with direct running and a flurry of crosses. They’ll stay out wide, hugging the touchline, looking for any opportunity to get forward and deliver to our 9 and 10. The full backs are attack minded too, and will look to contribute with overlapping runs and crosses of their own. It’s a very direct and attacking tactic, so I’ll expect plenty of chances to be created at the expense of possession.

This tactic will likely evolve throughout the first half of the season, with tweaks and amendments as reviews and analysis dictate. If you’ve any thoughts or suggestions feel free to let me know in the comments at the end.

In terms of set pieces I’ve kept things pretty simple. Corners will be pumped into the six yard box and our tallest players will attack that area. Nothing overly clever here, we simply want to take advantage of the height and heading ability in the team. With the quality we have in terms of set piece takers, and the attacking qualities of our centre backs, I expect us to bag a few headed goals from dead ball situations.

The media predict that we’ll finish 9th (out of 10) this season, and the board expect us to battle against relegation. That certainly suggests that we’re in for a tough year and should be content just to stay up. I disagree. If we can nail these new tactics and our new signings hit the ground running, I’m hopeful of a top half finish.

We want to gain promotion at the earliest opportunity for financial reasons and for our long term goals, but with just one automatic promotion spot that’s going to be really tough. Our best bet would be to finish 2nd-4th, which would qualify us for the promotion playoffs. Realistically, it could take us two, three, four seasons to get to the Premiership, but I’d love to lay down some good form and take a shot at the playoffs. Always aim high, right?

Very excited and ready to get stuck into my new reign at Cappielow Park.