Second attempt at the Playoffs

Once again, the target was to finish in a playoff spot and see how we fared in the knockout stages. Having been eliminated by Dundee United in the 2nd round last season, we were hoping for better luck at the second attempt. For two seasons running we’ve finished 2nd (with a slightly improved points tally this time around) and reached our playoff place target.

A 5-3 aggregate win over St. Johnstone in the 2nd round pitted us against Premiership opposition, Motherwell, who finished 11th (out of 12) in the top tier of Scottish football. A solid 1-0 win at home in the first leg put us in a fantastic position for the biggest game of our season. Having prevented Motherwell from getting that all important away goal it was all about holding our nerve, keeping things tight and seeing out a result in front of 10,662 fans at Fir Park. We did it! A 2-1 victory away contributed to a 3-1 aggregate win for The Ton. Greenock Morton will be playing Premiership football next season.

Subtle tweaks were made at the latter stages of the season to try and improve the balance and better harness the original tactical targets set out in the first post. Point and Shooter friend, FM Grasshopper, asked a pertinent question on twitter, which prompted some of those changes:

Don’t you find the DLP (deep lying playmaker) overwhelmed at times in the centre of midfield with so many attacking roles around him?

It was a good question, and the answer was yes. I’ve always seen the DLP (primarily Michael Tidser so far) as a key player in the tactic – someone to dictate play from deep and distribute the ball out wide, where we aim to attack from, but I haven’t felt that I’ve been getting the best out of him.

The subtle tweaks made were mentality ones alone, positions stayed as they were. The DLP has gone from defend to support, the wingers from attack to support, and the attacking midfielder from attack to support. So that midfield quartet are now playing with support roles, which has tightened up the diamond and brought them a little closer together. It’s a very slight change and I’ll need to use it for a longer period in order to assess its effectiveness. 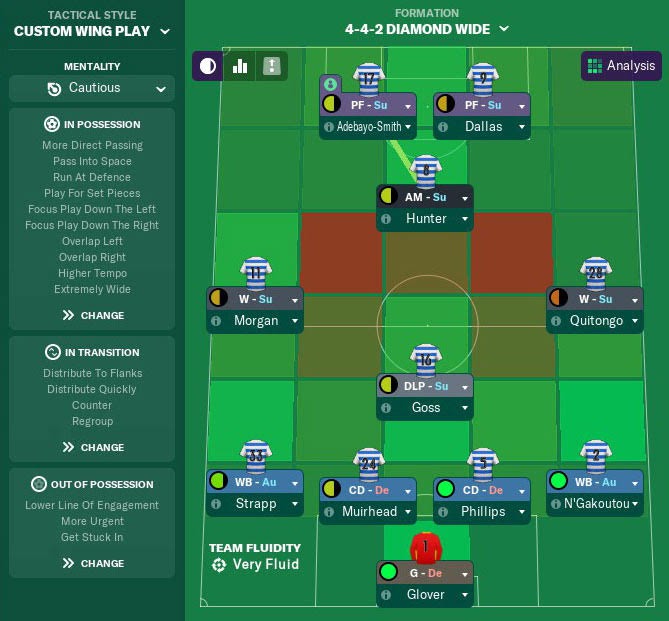 Tweaks have been made to the modified 442 diamond formation

Seen as a potential star player, Callum Gribbin didn’t disappoint. 7 goals, 5 assists and a 7.07 AV R in the Championship shows just how key he’s been for us in the final third. It was Denny Johnstone who cleared up at the end of season awards though, proving that the art of the target man is still very much alive. 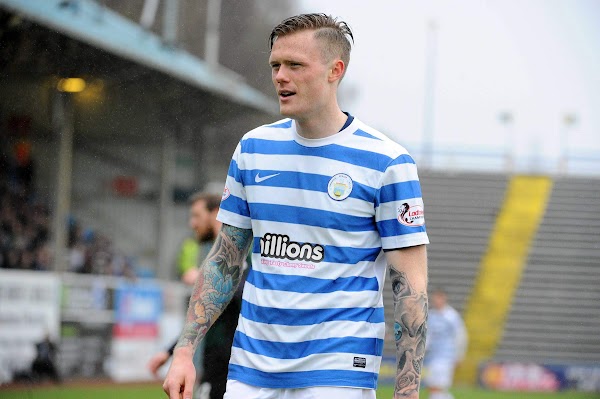 Our limited stature has made it difficult to bring in star names, even on loan, so we’ve looked to develop our own future stars when that’s not been possible. It’s been a breakthrough season for many of our young talents and in one fixture we featured six teenagers. Two 16 year old’s (Sam Hunter and James Faulds – both regens) and a 19 year old (Lewis Strapp), all from the Morton academy, have played regular 1st team football this season.

Our 19 year old goalkeeper, Will-Cesaire Matimbou, who we picked up on a free from PSG, made 12 first team appearances during a mid season goalkeeper injury crisis. Rohan Fotheringham (regen), our 17 year old center back giant (6’6″!), made 11 appearances, including his senior debut, after his £30K transfer from Partick Thistle in January. 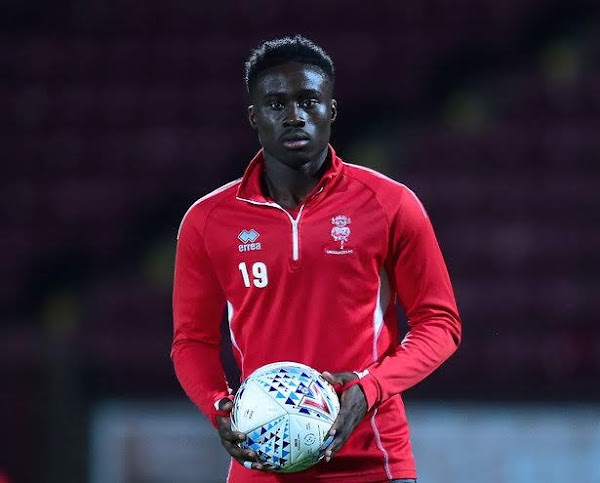 Whilst we still want to attract one or two star players, when that’s not possible, we’ll sign young and develop potential future stars internally instead. I’m particularly excited about the signing of 19 year old Jordan Adebayo-Smith. The Nigerian striker reminds me of one of my FM favourites, Mason Bennett. They’re a similar age profile, same position and both ooze potential. As a left footer I’m looking to turn him into a future left winger, though he’ll be able to fill in as a striker too (his natural position).

There’s also a return to Morton for Jai Quitongo. Once considered a hotshot with great potential, his career has derailed somewhat having had his troubles off the field. Hopefully a second stint under the stewardship of our team leaders can see him knuckle down and realise that potential. I’m keen on the young Scot doing well.

The signings of Lewis Morgan and Yannis N’Gakoutou mean that we now have full internationals in the squad for the first time, a big step forwards.

The sale of Ben Gladwin to Oldham for £100K is a great piece of business. Signed on a free last season, he’s been a peripheral figure in the squad and lacked any decent form. We’re well stocked in his positions as well.

With some improved numbers in the finances I’ve been able to look at staffing for the first time. More specialised coaches have been taken on and the medical department has been improved too.

Promotion has seen our scouting range upgraded to include Europe.

A potentially devastating chain of events materialised in January. The board went over my head and accepted bids for both Sam Hunter (the crown jewel of our academy) and Lewis Strapp (our emerging left back). Fortunately I managed to convince them to reconsider. Our finances typically suffer during the course of a season, hence the boards move to accept the bids. Losing our talented young prospects (and for very little money too) would have been two steps back in my opinion.

As expected, the aim is to avoid relegation this season and solidify our place in the Premiership. The squad’s looking enriched with talent since the preseason window and we’ve got lots of youngsters who can take the next step. I’m feeling confident for the season ahead. I don’t think we’ll have any trouble staying up over the course of the season, thought we do have tough opening fixtures against Rangers and Aberdeen.