A wonderful season ended in heartbreak. Having finished 2nd in the league we qualified for the playoffs, but were seen off in the 2nd round by Dundee United. They went on to beat St. Johnstone in the final, earning their promotion to the Premiership. It certainly put a downer on the final day, but we have to be delighted with the amount of progress made in just one season. It’s time to pick ourselves up and go again. I see no reason why we can’t aim for the playoffs again.

Halfway through the season we were sitting pretty in 3rd place, keeping dreams of a playoff place alive. A consistent second half of the season, and some tactical tweaks, helped us push on and claim a runners up place. It was our away form that ultimately let us down though, and that’s something to analyse in more detail.

At the halfway point our away form alone placed us 3rd from bottom, compared to our home form which placed us 1st. Clearly we were far too attack-minded for those away games. To combat this, we switched to a cautious or balanced mentality (depending on the quality of the opposition) instead of an attacking mentality. That saw us bump our away form up to 5th by the end of the season, three places higher. That should help us again next season. 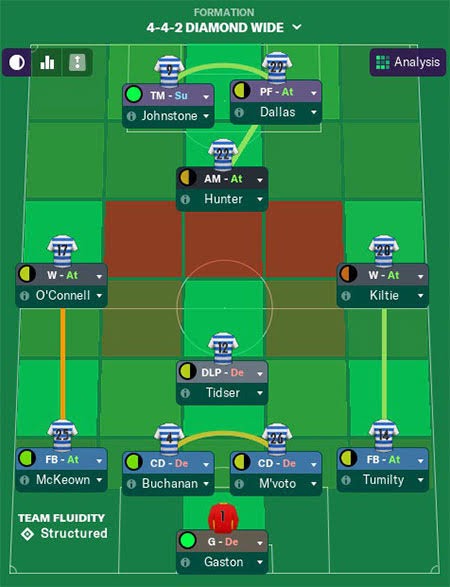 Our central midfielders (mainly Tidser and McAlister) didn’t have much of an impact come January. In part, that was likely due to our concentrated wing play. I had expected Michael Tidser to be pulling the strings as a central playmaker, the main man to distribute the ball out wide, but his average rating and assists were fairly low. His pass completion rate was at 82%, which isn’t bad, but could be improved. I figured he might be more effective, and more involved, in a deeper role. We’d been playing with a very central midfield duo, but a midfield diamond seemed better suited on second thought. Intentionally, we’re not using the middle of the pitch much at all, so playing Tidser deeper and sacrificing McAlister for an additional striker (it’s an attack-minded tactic after all) was the most significant tactical change.

Our first fixture using the diamond was a tricky home game against Dundee United. We won that 3-2, with both strikers getting on the score sheet. Sitting in that deeper playmaking role, Tidser had an average rating of 6.8, but most importantly: completed 32 passes, received the ball 33 times, gained possession 24 times and had 168 touches of the ball – more than any other player on the pitch. Though he wasn’t the stand out player, it’s clear that he played a pivotal role in that victory; being an outlet, recycling the ball and generally keeping things ticking over.

I’d highlighted the need to make life difficult for our opponents in the first post of the series, so ‘get stuck in’ was added to our ‘out of possession’ instructions to try and add some bite to our game, something I’d overlooked initially.

Greg Kiltie was our best player this season, racking up 13 goals, 8 assists, and a 7.26 AV R from a right midfield position. Andy Dallas was our top scorer with 24 goals in all competitions and will remain with us on loan next season too. Niko Kranjcar had a fairly productive first half of the season for us with 5 goals and 4 assists. Torn knee ligaments put him out of action for the rest of the season however.

I was delighted to gain a potential star player from our January youth intake. Attacking midfielder, Sam Hunter (a local lad), came straight into the first team, got ten appearances under his belt and scored his first senior goal. I’m really excited to see how he progresses next season. 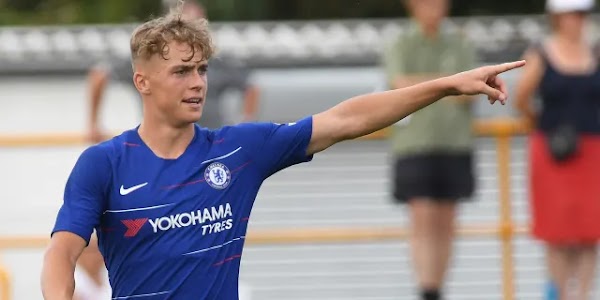 Central midfielder, Luke McCormick, joined us on loan from Chelsea in the January window and stays with us next season too. This was a potential banana skin as he didn’t really fit into our primary system. He’s only partially comfortable in a deeper role, so he’s currently retraining as a deep-lying playmaker. With no real backup for Tidser prior to this signing, there was a real lack of depth for a key position. With no cost or wages involved there’s nothing lost and he performed reasonably well. Something he does have that fits our model well is good teamwork and a high work rate, so we’ll see how well he adapts to the new role as we go into next season. He’s English but does have some Scottish roots too, so you never know, we may see him turning out for Scotland one day!

The remainder of our signings came at the end of the season. We’ve lost Greg Kiltie and Keelan O’Connell (loan signings), who occupied the wide positions, so we desperately needed some new wingers. Aidan Connolly is an important signing from Dunfermline. He had a great season on the left flank for the Pars, who in turn had a pretty good season too. He contributed 5 goals and 7 assists to their campaign.

Our marquee signing is attacking midfielder, Callum Gribbin, who joins on a free after being released by Man United. He’s a natural successor to Niko Kranjcar, who’ll be retiring soon. He can potentially do a job for us out wide as well as in the number 10 slot, since I don’t wont to stifle Sam Hunter’s progress. He’s absolutely lethal from dead ball situations (free kicks:17 and corners:15).

Nathan Phillips and Luc Bollan add some depth to the centre back positions, where we were looking particularly light.

We’ve released first choice keeper, Derek Gaston, and brought in Thomas Glover on loan from Spurs. With no wages and a two year loan deal, we’re saving some money there. The big Aussie stopper has great potential. I’d love to make the deal permanent one day if the opportunity presents itself.

Money has been an issue for us. We haven’t got any, and throughout the season our balance progressively regressed into the negative, despite a tight handling of the wage bill. A few things have helped to alleviate the situation:

Ultimately, we need Premiership football to see our finances bolstered long term. We’ll be targeting the playoffs again next season.