One Nil to the Boquerones

One nil to Málaga has been the story of our early form. After a steady start we emerged as league leaders after about fourteen games and have stayed there ever since. Lugo, the league’s top scorers, have been tailing us and look likely to push us right to the end. We’ve boasted a lot of possession, wins and clean-sheets so far, but not so many goals to begin with (I’ll cover this in a bit more details further on). We’re in a very strong position now going into the business end of the season, with automatic promotion (top two) a very realistic possibility.

Time to hold our nerve. 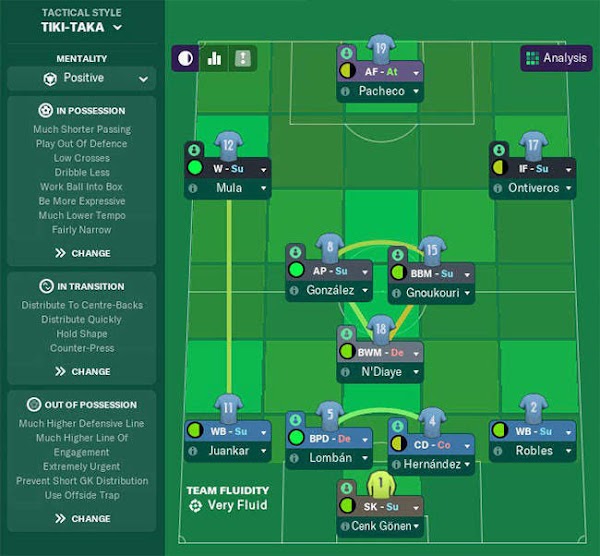 Tiki-taka is the name of the game for us. I touched on this in the last post – we’re looking to evolve the native style of football, which features short passing, movement, playing through the channels and maintaining possession. I began the process with a fairly standard looking 433 formation, similar to that used by Barcelona in previous years with a three-pronged attack. It was working pretty well for us – 60% or more possession in almost every game, even in away games. By dominating the ball we were keeping teams away from our goal, resulting in a lot of clean sheets. Teams were failing to register a single shot on goal in some cases. What we were struggling to do however, was put the ball in the back of the net ourselves. Progress, but not quite what I was after.

Looking over our existing formation/tactics, I felt we could make improvements by increasing the number of players involved in the different phases of play; overlapping runs, players involved in defense and attack etc. For me, the key positions to allow this were the full backs and the defensive midfielder. By changing the role of our defensive midfielder to a half-back (deeper than a standard defensive midfielder in possession, looks to offer an outlet for quickly recycling possession, offers protection against counter attacks), we could allow our full backs to operate a little higher up the pitch as wing backs, between the defense and midfield, allowing them to make overlapping runs. I also instructed our wingers/inside forwards to swap positions, to increase movement and make it difficult for opponents to mark them.

Since making these changes we’ve managed to convert some of those 1-0 wins into 2-0 wins. So more goals without losing clean sheets or possession. An issue to iron out over time is the player’s familiarity with their new positions, through training and future recruitment. 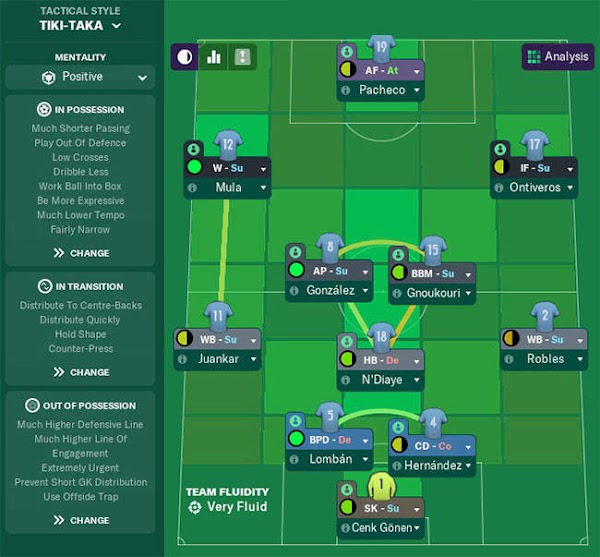 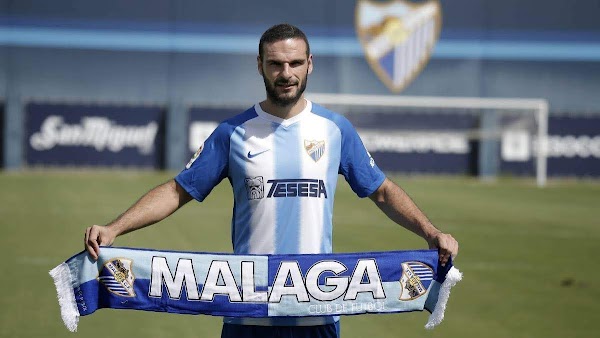 David Lombán has been the standout performer so far for Málaga

The defense have every right to be proud of their performances, with stalwart David Lombán (captain and penalty taker) the outstanding performer (20 starts, 4 goals, 1 assist, 9 PoM’s, 7.33 average rating). His defending’s been top notch and that’s been recognised with nine player of the match awards. He’s formed a really solid partnership with fellow defender Luis Hernández.

As a ball playing defender he’s also capable of this (check out his through ball in the video below). Sensational! Not really the tiki-taka way but I’ll let him off on this occasion.

Playing out of position as a lone striker, Dani Pacheco is our top scorer with nine goals and three assists from twenty starts. As he adjusts to the new role I’m hoping that tally will increase during the second half of the season, but I have to be happy with his progress.

On loan striker, Dani Raba, hasn’t lived up to the hype and, at the end of November, requested that we terminate his loan deal. Without a single goal from twelve appearances and an average rating of just 6.51, I was happy to let him go. We’ll need a new backup striker in January!

The big story of our January transfer window was the loss of first choice defender, Luis Hernández, to Sevilla. I didn’t want to let him go but his mind was made up and he’d already begun complaining to teammates. We had to let him go for the good of the squad. I was able to drive a hard bargain though, which saw £10.5M upfront with £4.3M extra in potential addons – a possible £14.8M in total. 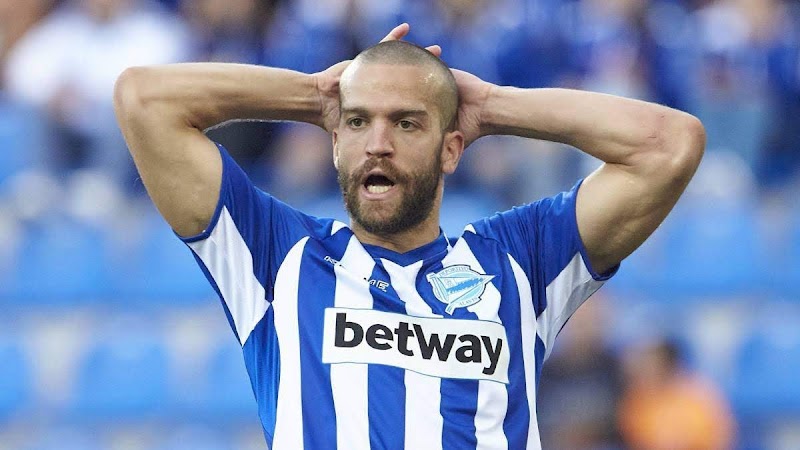 His replacement came in on the same day – Víctor Laguardia (who looks hard as nails!) from Alavés for £1.1M. A regular in La Liga for the last couple of seasons, it’s like for like in terms of experience and stature. We’ve obviously made a tidy sum there but only time will tell if Laguardia can fill the void. He’s currently recovering from cruciate ligament damage so we’ll have to wait a little while to find out. He should hopefully get a few games towards the end of the season.

We were active in the transfer window and secured a few more deals to bolster the squad, mainly signing young players with potential. Some of the new signings come in straight away, others will join the camp next season.

Confirmed for next season:

Alex Mula penning a new long term deal was our best piece of business. Having promised he could leave if a bid of £4M or more came in, we were very fortunate to get through that period, having rejected a late bid of £3.9M from Watford. As soon as the window closed he declared himself happy to stay, at which point we re-opened negotiations. Really excellent news.

I missed a trick at the very start of the series by not utilizing the Málaga B team. They’ve been an untapped resource for us but one that I plan to take advantage of in future. I’d sent a few younger players out on loan to reduce the wage bill but it might have been more prudent to move one or two of them to the B team, who play the same style of football as the A team. They’re currently struggling in the Second Division B4, with a genuine possibility of relegation. In January I cut young Scottish striker, Jack Harper’s loan deal short and put him into the B team, hopefully he can help save their season.

I have another young Scotsman on the books, Scott Tiffoney, who’ll join up with them next season. Their best young player is a midfielder called Deco – I’ve put him on a longer term deal along with Harper. We can definitely make better use of the B team next season for player development. Fingers crossed they stay up, it could go down to the wire.