Brian Clough liked his sides to play clean, attractive football, in a possession-based but counter attacking style of football. This inspired tactic will focus on the counter attacking aspect, with the ethos around giving up possession in order to hit opponents on the break. 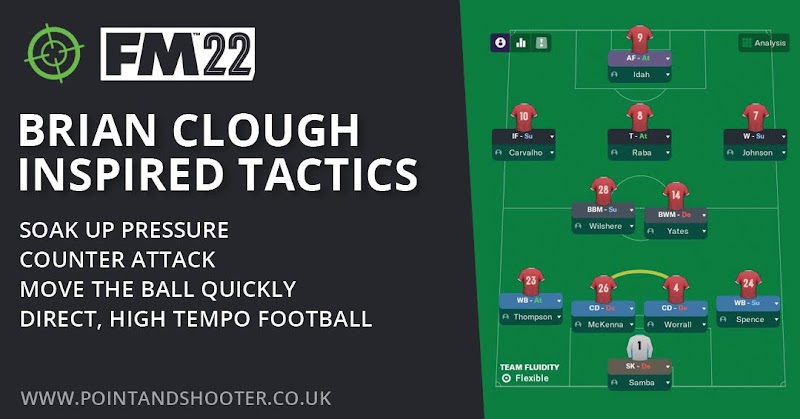 Clough liked to play the ball on the deck, so direct passing on the ground is well suited. Players will be expected to work hard, defend with a low block, soak up pressure and move up the pitch quickly with intricate forward play, aiming to carve out plenty of goal scoring opportunity through pace, and direct transitional play.

Typically he’d deploy a 442-like formation, but this would be so fluid it could easily be considered a 433 or 4231 formation, with players dragging opponents all over the pitch by moving in to channels, dropping in to space, overlapping, and cutting in.

This tactic is a very fluid 4231 formation. We have a lead striker, supported well by an trequartista (or shadow striker) who drops in to the space but is expected to offer a goal threat too. On the left flank we have an inside forward with a support duty, this could change to an attack duty and the trequartista swapped for an advanced midfielder. The idea is that there are always 2 striker-like players with support from wide positions. On the left, our attacking wide player cuts in to the middlde, so the left wing back has an attack duty – he’s expected to bomb down the wing and overlap. On the right we have a standard winger, so the wing back has a support duty so he can join the midfield as defence transitions to attack. Left and right sides could be switched for variety and to suit the players at your disposal.

The centre backs stay back to maintain some defensive solidity, with a defensive midfielder offering cover. A box to box midfielder contributes to all phases of play and helps the teams move the ball up the pitch quickly. The goalkeeper is asked to play through balls when the opportunity presents itself to aid counter attacks, therefore, is a sweeper keeper with a defend duty.

How to install Football Manager tactics

Generally speaking, the team will sit deep and narrow, soak up pressure, then burst forward with pace and dribbles, direct running and forward passes. The standard mentality is attack, but cautious should be used too when defending a lead or during away fixtures. At home we attack and aim to entertain the fans.

Since we’re sitting deep and soaking up pressure, the keeper should be tall, commanding and have good aerial ability. Passing/kicking/ throwing will aid with quick counter attacks. Should always have decent reflexes.

The centre backs sit deep and therefore do not require pace and passing ability, though it never hurts. Big strong lads with good tackling, marking and heading ability will help defend a narrow, low block. These players could be older, more experienced heads.

Wing backs should have great stamina, work rate, acceleration and decent pace. They’ll be expected to get up and down the pitch regularly to provide (dribbling and crossing), so youthful players should fit the bill better here.

Our ball winning midfielder plugs the gaps, so an experienced player could work well. Good marking, tackling and positioning will help. He should be a team player with good work rate. The box to box midfielder helps both defensively and offensively, so needs a wide range of skills – good positioning and tackling to win the ball back, passing, dribbling, finishing etc to help get the ball up the pitch and provide an attacking threat.

Our winger stays wider, and provides a threat with direct running (pace, dribbling) down the line before crossing or playing through balls. Our inside forward dribbles in-field often and plays intricate passes. First touch, movement, technique etc are all valuable.

Our trequartista drops in to space but also offers a serious goal threat – he should possess flair, dribbling, acceleration, finishing etc. The lead striker is our focal point. The advanced forward should be athletic, with great composure and finishing. Good anticipation and be good off the ball too.